GOTTERDAMMERUNG LIVE FROM THE MET WITH RESTRICTED VIEW 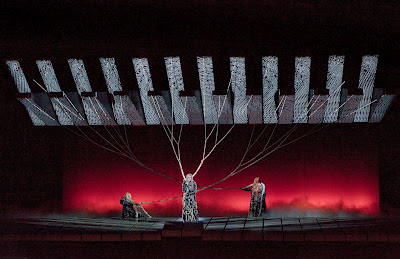 The Metropolitan Opera has now staged Gotterdammerung, the final part of Robert Lepage’s production of Der Ring des Nibelungen at Lincoln Centre. All four operas will be shown in three cycles in April and May of this year for those fortunate enough to go to New York to see the production.

For the rest of the world Wagner’s massive work was available Live in HD in movie theatres starting in October 2010 and culminating with Gotterdammerung on February 11, 2012.

The issue for me for all four operas is the handling of the camera angles and shots by Gary Halvorson, the director for the cinema as he is titled in the credits. No to put too fine a point on the matter, I have nothing but contempt for his work. He treats these grand productions as if they were video games for children who have a minimal attention span and opera fans who worship close-ups to the point of looking down singers’ throats. The sets, the grand view, the still shot where we listen and watch are of little interest to Halvorson. His sole interest seems to be clicking from close-up to closer-up, flicking from one shot to the other with alarming frequency and no apparent reason at all.

In Gotterdammerung, for example, at one point he showed us the back of Siegfried for no apparent reason and at another point he focused the camera on Alberich when Hagen was in fact singing. The dramatic sets, the visual pleasure of the background, they only appeared when he managed moved from one shot to another and the larger picture appeared momentarily.

Lepage’s production of The Ring was a major undertaking for the Met which means that it was very expensive. It had its share of mishaps and it garnered a great deal of publicity. By the very fact that it is a new production at the Met and staged by a famous movie director, means that it will go down in the annals of opera history. Mixed reviews? Well, has there been a recent production of Wagner that has not caused some controversy with reviews ranging from sheer adulation to Eurotrash?

The centerpiece of Lepage’s production is the moving planks. With proper lighting, they could be angled and appear like a river, lit up like a mountain and have a range of views and positions that seemed quite dazzling. This is subject to what Halvorson allowed us to see. At Lincoln Center the effect may well be spectacular or deadly. Those who saw the operas in their local movie theatres only, will never know.

The star of this performance was soprano Deborah Voigt as Brünnhilde. Voigt has a powerful and stupendous voice and the physical attributes of a highly convincing warrior goddess. My slight issue with her is that she has a tendency to appear to be smiling when it is inappropriate. This is perhaps a facial feature that she has to work on and does control most of the time. In the opening scene when she comes on stage after her honeymoon night with Siegfried, she has the right (maybe?) to smile even if her lover’s performance may have been less than stellar but later on she has the right to be in a pretty awful mood. Again, she seemed to be cracking a smile at inappropriate times and it may simply be Halvorson’s idiotic shots.

Tenor Jay Hunter Morris was the heroic Siegfried who is all promise but is nevertheless duped by the Gibichung clan. I would have preferred him a bit more heroic vocally but he carried the role very well indeed.

Waltraud Meier was an outstanding Waltraute with her pure and lovely voice and facial expressions that were perfectly suited to the role. Iain Paterson was the outstanding performer in terms of acting. He reacted with great sensitivity to what was going on around him as if he were a Shakespearean actor. He was excellent vocally as well. This was one befit of watching the performance on the screen; we could get details that were probably visible to few people at Lincoln Centre.

Wendy Bryn Harmer was a pretty and very loveable Gutrune. She seemed like an innocent girl who was born in the wrong family.

Erich Owens is a big and mean-looking Alberich who seethes with evil and cunning. He is a perfect match for the equally nasty Hagen of Hans-Peter Kőnig, a conniving evil man.

Fabio Luisi conducted the Metropolitan Opera Orchestra and that astonishing performance could not be affected by anyone.

With a couple of intermissions, Gotterdammerung lasts for about six hours. There are some great moments but in the end you want to see the immolation scene and expect it to knock you off your seat. This is the end of the world as Valhalla goes up in flames. You do see some red light against the planks and a bunch of large logs that make up Siegfried’s funeral pyre. The music swells up to one of those Wagnerian crescendos that leave you breathless but where is the visual effect? It may be there for all we know but if it is you have scant chance of seeing it.
_______

Gotterdammerung by Richard Wagner was shown Live in HD from the Metropolitan Opera on February 11, 2012 at the Cineplex Town Centre, Toronto, Ont. and other cinemas. For more information: www.cineplex.com/events