A BRIMFUL OF ASHA – HUMOUR AT GENERATION GAP AND CULTURAL DIVIDE 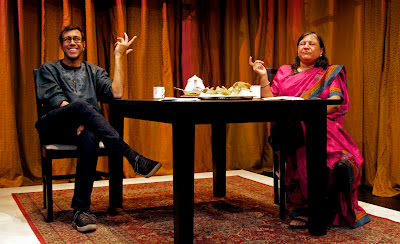 Theatre by one definition is a representation of reality. Actors pretend to be other people and we suspend our disbelief and accept them as the characters that they are supposed to represent.

When someone gets up on the stage and does not pretend to be anyone but himself then he is not “acting” but simply presenting or representing tales from his life. That is what A Brimful of Asha, now playing at the Tarragon Theatre is all about. Asha and Ravi Jain tell us some amusing incidents from their lives without pretending to be anyone else but the mother and son that they are.

Asha Jain is Indian and she was married by arrangement to a man who became a successful businessman in Canada. On stage and, we presume, in “real” life, she is a simple woman who has strong, traditional views about love, marriage, the position of children and life in general. She wants he son Ravi to get married and settle down. The woman he marries, needless to say, must be Indian and preferably one that his parents have arranged for him or, at least, approve of.

Ravi does not share all of those views. The younger generation not agreeing with the world view of their parents is one of the mainstays of comedy. In this case however the generational gap differences are supplemented with cultural differences and that, in the hands of a talented writer, can be a source of even more humour.

In the normal course of events, children grow up and marry. (Please put quotation marks around most words). That is the Canadian and Indian course of life. Yes, it is! The Indian way provides an additional curl: as far as Asha is concerned, the spouse of the single young person is found, examined, negotiated and settled upon by the parents.

Which brings us to Ravi. He goes in for theatre studies, flies off to Greece and does not obey the natural course of settling down with a wife and a mortgage as his mother wants him to. Enter the Indian modus operandi for connubial bliss: take him to India and find him a wife.

Ravi and Asha tell us what happened when they went to India (he for a visit, she and her husband for wife-hunting). Ravi is a professional actor, a good story teller and knows how to work an audience. His mother is not an actor which means she does not project or enunciate and makes numerous mistakes because her English is not perfect. But she is a loving mother who wants to see her son settled and she is advertently and inadvertently hilarious.

The two of them simply tell us what happened in India as the parents went from one marital prospect to another and all of them were unsuccessful.

I have never seen an audience that is so warm and receptive to what is happening on the stage. All, I assume, agreed with Ravi that he has the right to find his own wife based on love and whatever else makes people jump into matrimony. But emotionally, the audience was with Asha. They simply loved this woman who has been happily married for thirty-eight years and believes that love grows after marriage rather than diminish.

Ravi will no doubt choose his own wife and not allow his parents to choose for him. But will he choose the right one? Maybe he should just listen to his mother.

This Why Not Theatre production is directed by Ravi Jain and even if he can’t find a wife we must give him credit for his marvelous writing, acting and directorial talent.

A Brimful of Asha by Asha and Ravi Jain opened on January 26 and will run until February 26, 2012 at the Tarragon Theatre, 30 Bridgman Ave. Toronto, Ontario. www.tarragontheatre.com