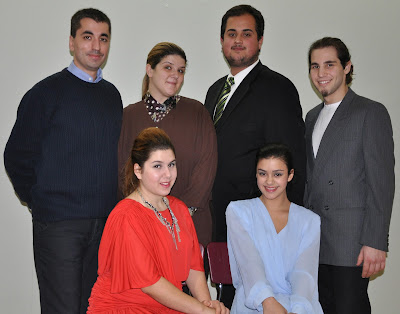 The Greek Community of Toronto’s Nefeli Theatre reminds one of that bunny that advertizes batteries – it just keeps on going. These are not good days for The Greek Community or for Greece, for that matter, but you would never know it from the energy and dedication of Nefeli and its Artistic Director Nancy Athan-Mylonas.

This year it has mounted Fonazei o Kleftis, a light comedy by Dimitris Psathas and if that were not enough it plans to stage Euripides’s Trojan Women in April.

Psathas’s play is an ideal vehicle for an amateur troupe. It has a straightforward plot, some broad comedy, colourful characters and honesty triumphs over corruption. Ms. Athan-Mylonas supplements it with “Nancy Effects” by adding dancing and providing bilingual assistance for the linguistically challenged. The result is a boisterous evening of laughter and enthusiasm from an audience that seems to crave this type of entertainment.

Psathas (1907-1979) was a prolific writer and his 1958 play is a satire on corruption (something practically unheard of in Greece) and a celebration of virtue.

General Solon (Demetre Anastasiou) has given a job to his brother-in-law Andonis (Dionysios Gekopoulos). Andonis is a thief. He is cooking up the company books and has invented a rich uncle in America who is supposed to be sending him money. A letter arrives from the uncle and it goes to the General. He puts it in his wallet and proceeds to lose it. An honest woman named Erasiklia (Irene Bitha-Georgalidis) finds the wallet and takes it to Lia (Anastassja Zanettoulli) the General’s wife and Andonis’s sister, but refuses to hand over the letter.

There is great fear that Andonis will be exposed by Erasiklia and frantic measures must be taken to prevent the disaster.

The script may not call for dancers to appear in the General’s living room where the play is set but no one told Nancy that. She has these talented dancers, the people want to see them and she will not let anyone prevent her from presenting dance sequences between scenes to entertain the highly receptive audience.

During the performance, we are provided with a series of narrators who summarize the plot in English. There are young people who may not be able to follow the story line and those “foreigners” who married Greeks who may need to be brought up to speed. 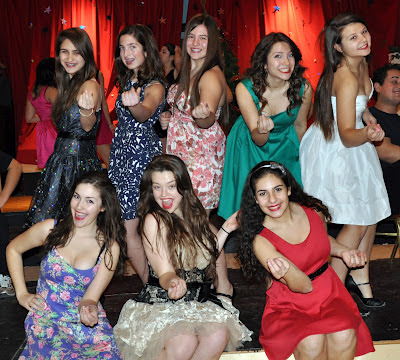 The production is dominated by the performance of Irene Bitha-Georgalidis. She has been with Nefeli for 19 of its 21 years and if that does not make her a veteran I have no idea what does. Her name has become hyphenated by marriage and she remains a natural, comic talent of immense proportions. The role or Erasiklia almost restricts her comic abilities but she expands the role. The honest wallet-finder speaks with a Greek hillbilly accent (it’s the best way to describe it, I think) she gyrates her body and is an enthusiastic imbiber. She is the exemplar of virtue as well, who will provide the uplifting happy ending. If supporting actors could convince Parliament to amend the Criminal Code to create the crime of scene-stealing, Bitha-Georgalidis will most assuredly be convicted.

The General is decent, a bit of a dolt and putty in the hands of his conniving wife. Anastasiou does a marvelous job in the role. He is a big guy playing someone perhaps three times his age. He manages to be quite funny in his histrionics and is melodramatic as necessary

Stella Mastrogiannakou’s Lela is lithe and sexy and espouses high morality in theory but prefers to practice it at less exalted levels when it comes to her husband’s conduct. The pony-tailed (sign of a mangas, no doubt) Andonis of Gekopoulos is the perfect crook who just wants easy money because life is so much more fun with it.

Zanettoulli is very good as the General’s devious wife. She can have a heart seizure on demand and is quite proud when she has not had or needed one for months or is it weeks. Maria Agrapidis is the perfect eaves-dropping maid Tasia who will tell you what she heard emanating from your bedroom last night.

Fonazei o Kleftis was performed at Hanaskayin Theatre in the Armenian Youth Centre at Victoria Park and Highway 401, Toronto. Not the usual venue for Nefeli. It is a very nice 400-seat theatre but that is not the point. Nefeli usually performs at the Polymenakion Cultural Centre in a makeshift theatre where chairs, lighting and a sound system are rented for each production. For financial reasons, this year’s production is in the Armenian Youth Centre and provides a sad reminder that the Greek Community is lacking something.

Fonazei o Kleftis by Dimitris Psathas opened on February 10 and will play on February 11, 12, 18 and 19, 2012 at the Hamaskayin Theatre, Armenian Youth Centre, 50 Hallcrwon Place, Toronto. Ontario. www.theatre-nefeli.com or www.greekcommunity.org Telephone (416) 425-2485