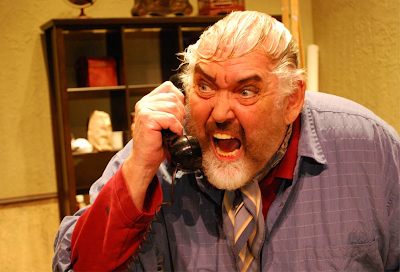 Zero Mostel was one of those comic geniuses that left an indelible impression on first encounter. You may forget all the actors in A Funny Thing Happened on the Way to the Forum but you will always remember the wily slave Pseudolus, the one with the beefy face, the rolling eyes and the hilarious facial expressions.

Mostel has found a double in Jim Brochu who has created a one-man show called Zero Hour that is now playing at the Bathurst Street Theatre in Toronto.

Brochu bears an amazing resemblance to Mostel. He has managed to copy Mostel’s movements, his voice and mannerisms and to convince us that we are in fact watching the great comedian tell his story to a newspaper reporter.

The play covers Mostel’s life from his beginnings in Brooklyn and on a farm in Connecticut, through his years in the theater, the movies and his experience as a blacklisted actor.

When he marries Katie, a non-Jew “from the original dysfunctional family” his own family disowns him. The rift is never bridged and decades later when he takes his son to see his grandmother on her deathbed she turns away from him.

Brochu also relates the dark period, financially and professionally, of Mostel’s life. It happened when he was accused of being a Marxist and hauled before the witch-hunters of the House Un-American Activities Committee (HUAC). Not surprisingly, Brochu recalls Mostel’s venom against the people who named names before HUAC such as Martin Berkeley, Lee J. Cobb and especially Jerome Robbins, “the little weasel”.

Mostel made a comeback and had his glory years in the 1960’s with roles like Pseudolus and Tevye in Fiddler on the Roof. He was in fifteen films and twenty-five Broadway shows, we are told.

The show takes place in Mostel’s studio where he enjoyed his life’s passion, painting. He acted so he can earn money to do what he loved most.

Zero Hour is directed by veteran actor Piper Laurie and it is a bravura performance. I found myself laughing out loud and thoroughly enjoying the show.

This production of Zero Hour is a reprise of last year’s presentation by The Harold Green Jewish Theatre Company and it is definitely worth a visit.
______