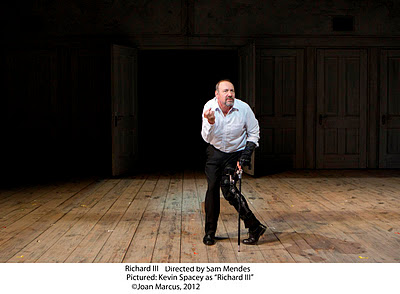 
The Brooklyn Academy of Music (BAM) and London’s Old Vic Theatre have initiated The Bridge Project through which they co-produce plays for audiences in England and the United States. Richard III was performed in London last June and it is now playing at the BAM Harvey Theater in Brooklyn, New York.

It is an astounding production of Shakespeare’s long and complex play. It is directed by Sam Mendes with Kevin Spacey, the Old Vic’s Artistic Director, in the title role.


Mendes directs a taut production done in modern dress, on an almost bare stage and a minimum number of props. He concentrates on the text and delivers a Richard III who goes from an exuberant, nasty and ambitious duke to a murderous and mad king. His followers and hangers-on become veritable Nazi sycophants or eventually realize the depth of his depravity and abandon him.


Spacey’s Richard has a hunched back and a seriously deformed leg causing him to walk crouched and require a cane for support. He decides in the opening soliloquy that he is not fit for the fineries of court life but will devote himself to villainy. His villainy has a highly comic vein and Spacey and Mendes take advantage of every opportunity to display it. Spacey contorts his face, rolls his eyes and pauses like a comic genius to evoke laughter. He modulates his voice speaks with extraordinary timing that makes him comically and frightfully successful in his nefarious objectives.


His first objective is to seduce Lady Anne (Annabel Scholey) during the funeral procession for her husband, a man that Richard killed. Spacey wheedles, cajoles, dissembles and manipulates the poor woman until she succumbs to his entreaties. His pride soars at his success as he celebrates his victory and boasts: “Was ever woman in this humour wooed? Was ever woman in this humour won?”

The exuberance and comic effects will slowly and subtly give way to increasing madness and brutality. In the end, Richard will have murdered all who stood between him and the crown and be left surrounded by a few toadies. He will be killed by the Earl of Richmond (Nathan Darrow) who will become King Henry VII.


The action of Richard III takes place in the shadow of civil war, usurpation of power and dynastic disputes. The Lancastrian King Henry VI was deposed by the Yorkist Edward IV. Mendes wants to emphasize the internecine bloodshed by having Queen Margaret, the widow of Henry VI, appear on stage frequently like a ghost haunting the present and reminding us of the past. A very effective device and well done by Gemma Jones.


There are more than a couple of dozen characters in Richard III and many of them play minor roles in advancing the plot or are not particularly well developed. Shakespeare did much better with the woman of the play. Scholey, dressed in black gown with a large cross around her neck is the picture of grieving majesty that succumbs to Richard’s dogged perseverance.


Haydn Gwynne as Queen Elizabeth and Maureen Anderman as the Duchess of York give superb performances as women with titles but scant power caught in a man’s world where a madman rules.


Notable among the men are Chandler Williams as Clarence and Chuck Iwuji as the Duke of Buckingham.

The costumes by Catherine Zuber consist of modern suits and black military uniforms for the men and long gowns for the women. They are quite sufficient for the effect that Mendes wants to produce.

There is judicious use of music especially drum which serve effectively especially for the battle scenes.

A powerful and memorable Richard III


Richard III by William Shakespeare opened on January 10 and will play until March 4, 212 at the BAM Harvey Theater, 651 Fulton, Brooklyn, N.Y. www.BAM.org