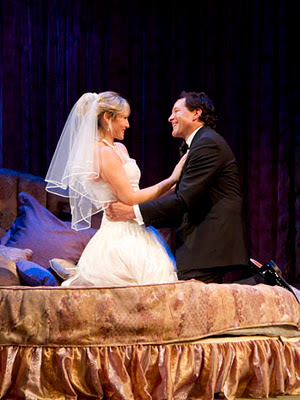 Manhattan is experiencing some of the coldest weather of the year (you thought Toronto is cold!) and you could suffer frostbite going from a Starbucks to the TKTS Discount Booth on Broadway. That could mean thirty feet of walking. The fastest way to defrost may be through laughter and one of the best providers of that is Relatively Speaking, three one-act plays now showing at the Brooks Atkinson Theatre.

The three comedies combine wit, broad humour and some thought to give you a couple of hours of delight.

Talking Cure by Ethan Coen is about a psychiatrist talking with a convict in a mental institution. The doctor (Jason Kravits) thinks he can cure the criminal patient (Danny Hoch) who is a brilliant postman and can confuse anyone. The patient is smart enough to suggest that by the end of the session, the doctor may become the patient. Coen gives a bit of an “explanation” about the patient’s current condition by showing us his parents just before the patient was born. The parents (Allen Lewis Rickman and Katherine Borowitz) are arguing at the top of their lungs while waiting for guests to arrive for dinner. As the door bell rings, the mother goes into labour and the curtain comes down amid the laughter.

George is Dead by Elaine May is even funnier than the first play and develops a couple of characters. Doreen (Marlo Thomas), a rich, spoiled and useless woman, knocks on the door of Carlas’s (Lisa Emery) apartment and announces that her (Doreen’s) husband George just died on the ski slopes.

Doreen does not have a clue about what to do and she is so self-centered that she cannot feel or express any grief for her husband or any empathy for another human being. She is hilarious in her selfishness. Emery is also funny but she is humane, down to earth and reacts with superb sensitivity to Doreen’s foolishness. A marvelous performance by Emery. Husband Michael (Grant Shaud) makes a brief appearance where the couple argues and he leaves.

The third play, Honeymoon Motel by Woody Allen is the piece de resistance and it is simply hilarious.

Nina (Ari Graynor) wearing a bridal dress and Jerry (Steve Guttenberg), wearing a tux, arrive at an extremely tacky motel room directly from the wedding ceremony and are about to start their honeymoon. Eddie (Grant Shaud), a friend of the groom arrives and points out that the “groom” is not the groom, not even the best man, but the stepfather of the real groom. The stepfather and the bride eloped just before she could say “I do.”

Jerry’s wife, Judy (Caroline Aaron), andNina’s parents (played by Julie Kavner and Mark Linn-Baker) arrive as does the officiating Rabbi (Richard Libertini). The latter will progress from tipsy to drunk during the play.

This is classic Woody Allen and jokes about sex, politics, psychiatrists and you name it will abound. The zingers will keep you laughing.

The actors directed in all three plays by John Turturro maintain speed and timing and comic panache that keep the laughter coming.

Just don’t forget to put your hat on when you get out of the theatre. It is still cold outside no matter how warm you may feel after so much laugher.
___