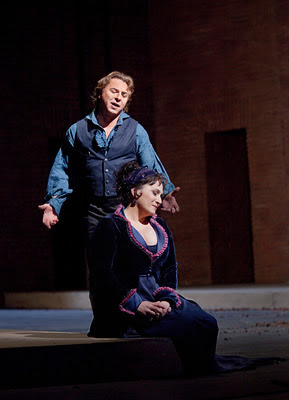 In September 2009, New York’s Metropolitan Opera parked Franco Zeffirelli’s production of Tosca and replaced it with a new staging by Swiss director Luc Bondy. Zeffirelli’s interpretation of Puccini’s potboiler held the stage for 25 years at Lincoln Center and a new production was definitely in order. The reception, however, was less than enthusiastic and Bondy was roundly booed when he took his bow on opening night.

The Met has not been deterred by the controversy and it has mounted the production again with a different cast and I caught the performance of January 14, 2012. American soprano Patricia Racette sang the title role with considerable success. She managed to be convincingly jealous and dramatic and what she lacked in tonal beauty at times did not detract from making her performance enjoyable. Her “Vissi d’arte” was quite gorgeous.

Tenor Roberto Alagna as Cavaradossi hit his stride early with “Recondita armonia” and maintained a finely tuned performance. He hit his high notes with ease and unerring accuracy, interacted well with Racette and gave a superb performance.

Georgian baritone George Gagnidze was a disappointing Scarpia. In his open black shirt, he looked more like a minor Mafia thug than a Baron and the Chief of Police. When I saw the performance Live in HD from the Met he exuded evil and depravity that were simply not visible in the live performance. He did not express any authority and gave the impression of a dirty, old man (OK he is middle aged) who is simply nasty and ineffectual. The three hookers in his office seemed simply out of place and his performance was unsatisfactory.

Part of the blame goes directly to Bondy and his directing of Act II. The set with the large couches and tawdry appearance, Scarpia’s attempted seduction of Tosca and her murder of him was almost comical in its ineffectiveness. The second act takes place in Scarpia’s study in the Farnese Palace. It looks more like a warehouse with barren walls and the large couches, useful, no doubt, for the hookers who seem to share the baron’s study.

Cavaradossi is famously tortured in an adjoining cell during the second act and in most productions he screams in agony. Bondy saves us from the melodramatic screams but he does not let Tosca see her beloved being abused either. There is something missing here to convince us that she has overwhelming cause for her pretended agreement to surrender her virtue to the monstrous Scarpia.

Richard Peduzzi’s set for first act in the church is reasonably effective. The set is grandiose if unadorned. Angelotti (Richard Bernstein) comes down a rope through a window in his dramatic escape from the police.

The set for Act III, the execution scene, is barebones with a wall for the shooting and a parapet for Tosca to jump off. Cavaradossi is shown playing chess with a guard. Really? Tosca usually jumps to her defiant death off the wall and away from the audience. Bondy has the dramatic idea of having her leap towards the audience. The lights are dramatically turned off as she is about to jump to her death.

Peduzzi’s sets and the costumes designed by Milena Canonero range from the good to the indifferent. Do move away from Zeffirellian concepts but give us something that will grab us with its originality and brilliance and not just make us scratch our heads.

Finnish conductor Mikko Franck conducted the superb Mtertopliyan Opera Orchestra brilliantly. If you did not like what was on stage you could always rely on what was coming from the pit.

In the end this is a Tosca to remember as much for its faults as for its virtues while waiting for a more inspired conception.
___