THE GOLDEN DRAGON AT TARRAGON IS LIKE GOING TO THE DENTIST 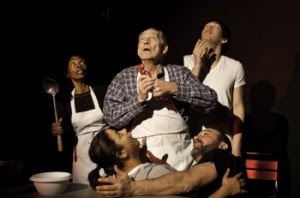 The cast of The Golden Dragon. Photo Cylla vpn Tiedemann

One of the plot lines of The Golden Dragon, Roland Schimmelpfennig’s play now showing at the Tarragon Theatre, is that of a boy with a toothache. He screams in agony a number of times until the tooth is removed by a kitchen worker using crude pliers. Although the play does have some interesting turns and flashes of theatricality, the ninety minutes it takes to watch it were about as pleasant as a visit to the dentist.

The play takes place mostly in the kitchen of The Golden Dragon a Chinese/Thai/Vietnamese restaurant and requires five actors who play a large number of roles. The characters are describe as A Man Over Sixty (David Fox), A Woman Over Sixty (Lili Francks), A Man (Tony Nappo), A young Woman (Anusree Roy) and a Young Man (David Yee) but that is of little help in terms of the characters that we will meet and the roles played by the actors..

All five work in the kitchen and they will play a number of parts in the various strands of plot that Schimmelpfennig devises. Two men will become flight attendants whom we see in the restaurant and their apartment. One of them will find the boy’s bloody extracted tooth in her soup and eventually put it in her mouth.

The boy will bleed to death and he will be wrapped in a carpet and disposed of in a river.

We will hear the story of an ant and a cricket, the tale of the people in the apartment upstairs and the goings on in the busy kitchen. The action will move quickly from one plot strand to another until the 90 minutes are finally up.

The set for all this activity is on and around a raised platform in the middle of the theatre with the audience seated on both sides. The actors put on white aprons at the beginning when they are in the kitchen and make small changes during the performance such as the flight attendants putting on wigs to indicate the blonde and the brunette and wrapping a red blanket to indicate the woman in the red dress.

Schimmelpfennig is not interested in any realistic portrayal and the characters frequently (and annoyingly) punctuate their speech with “pause” and short “pause”. He wants us to know that we are being told a story and not watching a representation of a tale.

There are a few laughs scattered here and there and the image of people in the hole of the tooth is quite arresting. But by the time you get there, you are bored out of your mind. The strands of plot move slowly, the screaming boy becomes annoying, the action is slow and tortuous. Is it the production or the play? I am not sure.

A few words about the playwright. According to Ross Manson, who directs the production, “Schimmelpfennig is the most produced living playwright in Europe.” He has received numerous awards for his plays and The Golden Dragon won the Muhlheimer Dramatists Award and was selected as Theater Heute’s Play of the Year in 2010. Clearly some critics saw qualities and virtues in the play that simply eluded me. Schimmelpfennig writes in German and what we see is a translation by David Tushingham.

I really cannot complain about the talents of the actors or their ability to move swiftly from one character to another and to give, in the end, impressive performances. Perhaps the transatlantic and translingual voyage has made an awards-winning play into a pretentious bore.

The Golden Dragon by Roland Schimmelpfennig opened on January 18 and will play until February 19, 2012 at the Tarragon Theatre, 30 Bridgman Ave. Toronto, Ontario. www.tarragontheatre.com