SIMON BOCCANEGRA IN GRAND STYLE LIVE FROM THE MET IN HD 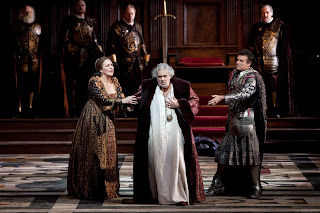 The big news about the current revival of Verdi’s Simon Boccanegra at the Metropolitan Opera was the epoch-making event of Placido Domingo, a tenor, singing the role of a baritone. The Met did not hesitate to emphasize the fact by stating without any modesty that “tenor Placido Domingo makes history taking on the baritone title role” of the opera.

One thing that you notice about Simon Boccanegra is that it is an opera that falls a bit short on tenor voice requirements. There is one tenor role, that of Gabriele Adorno, but it is not the most important one. The other male characters are sung by basses and baritones.

When I saw the superb revival of Giancarlo del Monaco’s 1995 production Live from the Met, I could not figure out what the fuss was all about. Domingo was in fine voice and if there were nuances that a baritone would have brought to the role that were not indicated by a tenor, I must admit that they escaped me. Three years ago I saw the same production in New York with baritone Thomas Hampson in the tile role. Hampson is considerably younger than Domingo and his performance was outstanding. But the opera does not suffer from being done by a tenor like Domingo in the title role.

There are more serious issues with Boccanegra than the vocal range of the singer in the title role. The opera premiered in 1857 and its premiere can safely be described as not a success. In 1881 Verdi brought in the great librettist Arrigo Boito and he did some surgery on the words of Francesco Maria Piave, the original librettist. Verdi himself did extensive revisions to the music. The end result was an interesting and enjoyable work that remains on the periphery of the standard repertoire largely because of the unbelievable plot.

The plot is convoluted beyond description and you may have difficulty understanding parts of it even if you paid close attention and read the synopsis. There is no need to worry about it; there are some fine arias and ensemble pieces and the opera is enjoyable without remembering the plot for longer than the performance.

Just a small taste of the plot. In 14th century Genoa, the plebeian party manages to appoint Simon Boccanegra, a former pirate to the position of Doge or Chief Honcho of the City. That’s clear.

He wants the job so he can gain social status and power to marry the patrician Maria who also happens to be the mother of his illegitimate daughter. Her father, Jacopo Fiesco, has her under lock and key. No sooner does Simon qualify for Maria’s hand than her father announces that she is dead. That’s just the Prologue.

We jump twenty five years to get to Act I. Boccanegra is ruling with a firm fist and has sent people into exile. He has enemies. Jacopo Fiesco has changed his name and has a ward called Amelia Grimaldi. Amelia is in fact Fiesco’s granddaughter and Boccanegra’s daughter but they do not know that.

Let’s jump to the end. Fiesco and Boccanegra will discover Amelia’s identity. She will marry the tenor and patrician Gabriele Adorno but not before Boccanegra is poisoned.

Boccanegra is a dark and somber opera and the production reflects those qualities. There are some problems with darkness on stage when it is being broadcast on the large screen but the grandeur of the sets is quite apparent. The set and costume designs are by Michael Scott and he has not spared anything from the monumental square of the Prologue to the magnificent council chamber in the Doge’s palace.

If Boccanegra is not kind to tenors it is a great showpiece for a soprano. There is only one soprano and not even a mezzo to provide some competition. Canadian soprano Adrianne Pieczonka has a big enough voice to do Wagner but also has the suppleness and vocal tone to handle to role of Amelia. Tenor Marcello Giordani was in fine form as her lover Gabriele Adorno while veteran bass James Morris was the nasty Jacopo.

The camera shots were handled by Barbara Willis Sweete who does not consider opera broadcasts as a video game for a twelve year old. There were some silly shots and some unnecessary close-ups but there were also scenes when there was no change in angle for many seconds.
Posted by James Karas at 12:42 PM