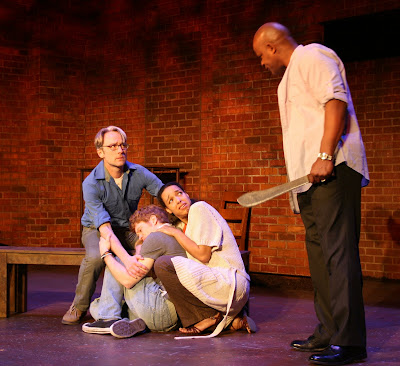 In 1994 between 800,000 and 1,000,000 Rwandans were massacred. The rest of the world stood by and did nothing to stop the genocide even though they knew it was happening. In fact, the United Nations withdrew 90% of its peacekeeping troops and refused to call the killings a genocide.

It is this subject that J.T. Rogers tackles in his play The Overwhelming which is now playing at the Berkeley Street Theatre. It was an event of such horrific dimensions that it could not be described in almost any work of art. That Rogers fails to capture all the horror is inevitable; the extent to which he succeeds is admirable.

Rogers attempts to blend the personal story of an American family as they interact with foreign officials and Rwandans in the days leading up to the genocide. The play is part personal drama and part documentary and the two plot strands are interwoven.

Jack Exley (David Storch), a teacher of International Relations goes to Rwanda to write a book about Dr. Joseph Gasana (Nigel Shawn Williams). Exley and Gasana were roommates in college and Gasana is now running a paediatric hospital for AIDS sufferers. Exley needs to write a book in order to save his academic career.

Exley’s wife Linda (Mariah Inger) is a creative non-fiction writer and she wants to capture the sprit of Rwanda in a magazine article. Both Exleys are naïve to the point of stupidity and arrogance. They are so devoid of common sense that they are downright annoying. She is black and he has a son, Geoffrey (Brendan McMurtry-Howlett), from a previous marriage who is equally annoying.

The personal and family issues of the Exleys are the background to the swelling political problems as Tutsis threaten to return to Rwanda from Burundi where they were forced into exile by the Hutus. The extremist Hutus believe that the only means to ensure their own survival is by massacring all the Tutsis.

Rogers wants to bring a number of issues to the foreground and he uses twenty-two characters played by eleven actors in order to achieve that. There are French and American diplomats, a British and a Rwandan doctor, a UN Officer, and Rwandan government officials.

Samuel Mizinga (Sterling Jarvis) is a charming Rwandan official who befriends Linda and attempts to convince her that Tutsis are not real Rawands but mere invaders who must be resisted with every force. The French and American diplomats are not prepared to do anything and the UN forces are so few that they could not do anything even if they wanted to.

With twenty-two characters played by eleven actors in numerous locations, there are some scene changes that are not easy to follow and you have to pay very close attention to keep up with who is doing what.

This is a huge subject, as I said, and it cannot possibly be covered in a couple of hours but one does get the sense of the paranoia, the hatred and the fear between the two tribes. How two tribes that have a great deal in common can foment hatred leading to genocide is one of the astounding and unanswerable questions of history and the play.

The choice of the Exleys is not a sound one, I suggest. They should be less naïve, less annoying for the story to flow.

David Storch does a superb job as Jack Exley, the naïve and ridiculous academic. Storch was so effective in the role that I almost wished that Rogers had created a less disgusting character. Mariah Inger is a perfect foil for the foolish academic. Hardee T. Linehan is the hearty American diplomat Charles Woolsey whom we meet on the golf course as the massacre is proceeding.

Director Joel Greenberg prefers speed to ponderousness in scene changes. There are lot of scene changes done quickly and actors frequently speak simultaneously. There are at least four languages and the plot is not always easy to follow. Less speed may serve the play better.

The Overwhelming is a production of Studio 180 Theatre Company. This, they tell us, is their eighth major production following such successes as Stuff Happens and The Arab-Israeli Cookbook. Pretty good record that.
______