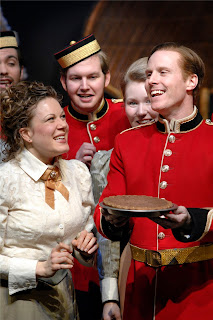 In the spirit of the Vancouver Olympics, we are awarding medals for knowledge of cultural history.

For gold: Who was Oscar Telgmann?

For Silver: who or what is Leo, The Royal Cadet?

For Bronze: Name a Canadian operetta that opened in Kingston and ran for 1700 performances?

People who follow productions by the Toronto Operetta Theatre (TOT) have an unfair advantage over others but that is as it should be. People who practice the downhill slalom for years have an advantage over those who have never put on skis.

It is an unfortunate fact that the medals will not be claimed by most Canadians. But that is not for any lack of effort by Guillermo Silva-Marin, the Founder and General Manager of TOT who for 25 years has been producing standard and some rare operettas in Toronto under budgets and conditions that would give pause to most people.

Telgmann (1855-1946) played a significant role in the musical life of Kingston, Ontario including establishing the Kingston Symphony Orchestra. The lyrics for Leo were provided by George F. Cameron, a lawyer, poet and editor of the Kingston News. The operetta, subtitled “An Entirely New and Original Canadian Military Opera in Four Acts” premiered in Kingston 1889. It toured to a number of cities and is estimated to have racked up 1700 performances by 1925.

Let’s get to Leo. We are on the picnic grounds of the Royal Military College, Kingston, in 1878. It is Queen Victoria’s birthday, the British Empire is in its glory the cadets are toasting Her Majesty’s health and the Commander is trying to recruit some civilians into the army. You see, there are some Zulus in Africa who need to be put in their proper place and Canada will do its bit for the empire.

The young ladies show up as do Herr Shulius and Monsieur Francois, the buffoonish professors of German and French. After some boisterous singing, the boys do join the army and are sent to Africa where they do their job (a war “dance” with the Zulus but we know what that means) and return triumphant. They are reconciled with their sweethearts and after a lot more singing, the operetta ends and we all live happily ever after.

Leo does not have much of a plot even by operettic standards. But it has spirit, military spirit, that is. These people have a song for every occasion. The men will sing about “Glory and Victory”, “The Life of a Rover”, “Soldiers and Our Country’s Pride” and the ladies will tell us that “We are Maidens” and “True Love Can Never Alter”.

Leo our hero is played by a tall and heroic-looking Cory O’Brien who can belt out the military and softer lyrics to his sweetheart Nellie (well done by Kristin Galer). Robert Longo is the upstanding Colonel Hewett and Patrick Whalen is the swaggering Captain Bloodswigger, “a true British soldier.”

Joseph Angelo and Gregory Finney are the foolish professors and they are good except that Angelo does not quite look Germanic. Stefan Fehr plays Cadet Wind who is composing a piece called the Faerie Opera and when there is no more plot left, a scene from his work is used to finish off the evening.

What TOT lacks is not talent, imagination or willpower. It has no money. As a result there was no set to speak of. What was lacking in funds was made up is spirit.

Lehar, Offenbach and Strauss are in no danger of being knocked off their pedestals by Telgmann but it was a delight to see a period piece from Canada’s past.

The original production of Leo at Martin’s Opera House in Kingston was under the Patronage of the Royal Military College. The current production is stated to be “Under Honorary Patron Commodore Commandant W. S. Truelove and the Royal Military College of Canada.” That may well be the real name of the current Commandant but appearing on the programme for an operetta I could not help but think that he sounds like one of its characters.

The current production is a revised and adapted version of the original. Mr. Silva-Marin and Virginia Reh revised the operetta in two acts with additional music by S. Codman. John Greer adapted and arranged the score.

The TOT Orchestra, a baker’s dozen of players conducted by Jeffrey Huard, did yeoman’s work as did the Vocal Ensemble.

There will be no medals awarded for recognizing the next production by TOT. It will be Gilbert and Sullivan’s The Pirates of Penzance starting on April 27, 2010.
_____