DER ROSENKAVALIER IN GRAND PRODUCTION LIVE FROM THE MET IN HD 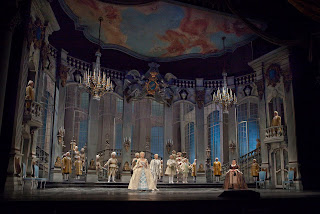 The plot is as familiar as it is old. When Hugo von Hofmannsthal undertook to write a libretto for a Mozartean opera for Richard Strauss he reached into the barrel of familiar comedy plots and came up with that one.

He fine-tuned it by adding a love interest between an older woman, a princess and a 17-year old count – the same young man you will fall in love with the pretty young lady that the baron wants to marry. It turned into an exquisite libretto for which Strauss composed some plush music and the result was Der Rosenkavalier, a staple of the opera repertoire.

The Metropolitan Opera has revived Nathaniel Merrill’s production which was first seen more than 40 years ago and this time it has broadcast it around the world in HD. This is opera production in the grand style. We are in the middle of the 18th century and the ladies wear gorgeous dresses, the men wear wigs and carry swords and the rooms are palatial.

The splendour and grandeur of the sets is just the beginning. You will also see the gorgeous Renee Fleming as the princess who is more familiarly known as the Marschallin, the pretty Christine Schäfer as Sophie, the daughter of the rich merchant von Faninal who wants to pawn her off to Baron Ochs and the good-looking Susan Graham as Octavian, the young count who loves everybody.

Fleming is the Field Marshal’s wife and we find her in bed with Octavian. Their fun is interrupted by the visit of the Marschallin’s cousin Ochs. Von Hofmannsthal invented a custom of a silver rose being delivered to the future bride by a relative of the groom. The job goes to Octavian and he looks at Sophie, she looks at him, Strauss provides the rising music and it is love at first sight.

The plot line will develop the two strands. The baron’s boorish behaviour will provide broad comedy and the necessity of the Marschallin to give up Octavian and his love for Sophie will provide the touching drama and romance that make the opera such a complete work.

Fleming is that rare soprano that provides vocal and physical beauty combined with acting talent. She has a lustrous, luminous voice and her Marschallin is affecting and moving and the performance is memorable. She interacts with mezzo-soprano Susan Graham extremely well and the latter is vocally convincing as well as doing a trousers role marvellously.

Soprano Christine Schäfer is pretty, demure and spunky as Sophie. She has to stand up to her father, say no to the Ochs and go for Octavian. A job well done, one would say.

Strauss preferred female voices and he almost left men out of this opera. The major male role goes to Baron Ochs sung by bass Kristinn Sigmundsson. Baritone Thomas Aalen appears as Sophie’s father and there is an aria for a tenor (Eric Cutler) but these are relatively minor roles.

Sigmundsson is fine vocally but he has no particular comedic talent. When it comes to broad comedy the role carries him instead of the other way around.

The broadcast was directed by Barbara Willis Sweete and there are some issues that must be mentioned. Act I takes place in a huge bedroom but we rarely get to see it. The more serious problem is that it appears ill-lit even when day breaks and presumably the sun comes streaming through.

The set for Act II in the cob Faninal house is even more spectacular but again we are given scant opportunity to enjoy it. The constant change of camera angles is annoying. When we have a perfect view of the singers, leave the scene alone. There is no need for any change.

Strauss’s “Comedy for Music” is approachable, enjoyable and opera on a grand scale. The Metropolitan Opera does it full justice.
Posted by James Karas at 11:43 AM