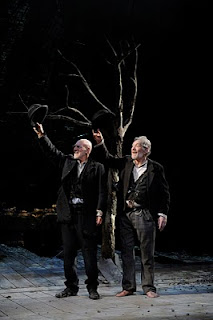 Patrick Stewart and Ian McKellen in Waiting for Godot
The end of one year and the beginning of a new one is as good a time as any to look back at the good, bad and indifferent theatrical productions that I saw in 2009.

As always, I look for things Greek. Not quite in the spirit of the father in My Big Fat Greek Wedding for whom everything is Greek but in the sense of searching for Ancient Greek drama and links to Greek culture. My luck in finding Aeschylus and Company on the stage during 2009 was simply dreadful. No doubt there were many productions but I was not in the right place at the right time to see much of anything.

The year did start auspiciously with a production of Euripides’s Medea at the Canon Theatre in Toronto. Miles Potter directed his wife Seana McKenna using Robinson Jeffers’s 1946 adaptation. A year later I still recall McKenna’s performance in the role of the vengeful queen. The superb production boded well for Greek drama to be made intelligible to modern audiences and be produced more frequently.

It did not happen. The Stratford Shakespeare Festival did not offer anything closer to Greek drama than Racine’s Phèdre. Seana McKenna was outstanding in the lead role and Tom McCamus gave a polished performance as Theseus but the production fell flat partly because of Timberlake Wertenbaker’s prosaic translation and partly because of director Carey Perloff’s attempt to make Racine more approachable. It may have been approachable but was decidedly not Racine.

Phèdre was also produced by the National Theatre in England with Helen Mirren in the title role. Nickolas Hytner directed the production using Ted Hughes’s translation of the play. The production had many virtues but Hytner kept Mirren’s emotional range in tight rein. I expected Mirren to deliver the equivalent of a Mad Scene in an opera but Hytner would not permit her.

Aside from those slim pickings the only things Greek that I chanced on were The Suitcase by Nancy Athan-Mylonas and Lydia Soldevila Tombros and the opera Alexander the Great by Panayotis Karoussos.

The Suitcase presents a sentimental journey back to Greece and a celebration of the Greek immigrant and the Greek Community of Toronto. It was part of the celebration of The Greek Community of Toronto’s 100th anniversary and contained the Athan-Mylonas mixture of song, dance and story. Not least important was the fact that Ms Athan-Mylonas involved over 100 people, mostly young, in the production. The pleasant and painful memories that they evoked struck a deep emotional connection with the audience and it responded with a standing ovation.

Karoussos’s opera Alexander the Great was staged by The Pan-Macedonian Association of Ontario in a concert version at the P.C. Ho Theatre in Scarborough. As the President of the Association, I could hardly review the production but suffice it to say that it was the first time that an opera had been staged by a Greek association in Ontario.

After that the search for things Greek descends to My Big Fat Greek Wedding type of scramble for “everything is Greek.” Orfeo ed Euridice, Orphee aux enfers, Idomeneo and Demofoonte are all based on Greek mythology but Gluck, Offenbach, Mozart and Niccolo Jommelli made the egregious errors of not choosing Greek parents or being born in Greece. They are all ours anyway, aren’t they?

I saw Idomeneo and Orphée aux enfers along with Wagner’s Die Gotterdammerung during my annual visit to Aix-en-Provence in southern France. Olivier Py’s production of Idomeneo was unorthodox, eccentric, wild and bizarre. Py moved the setting from the seashore and palace of Crete to an unrealistic cityscape with chrome structures with men wielding machine guns. A long way from Mozart but an outstanding re-imaging of the opera.

Offenbach took the story of Orpheus and Eurydice and turned it into rollicking fun in Orphée aux enfers. The unholy burlesque of gods and mortals was done to perfection at Aix.

From the light we turn to the serious, really serious, because the other production at Aix that I saw was Wagner’s Die Gotterdammerung. With the peerless Ben Heppner as Siegfried and Katarina Dalayman as Brünnhilde, Stéphane Braunschweig directed a sparse, almost minimalist and extraordinary production. The real star in many ways was the mighty Berlin Philharmonic under Simon Rattle.

The highlight of the year was spending a week in New York and seeing the entire Ring Cycle at the Metropolitan Opera. The Met revived Otto Schenk’s twenty year old production of Der Ring des Nibelungen for the last time and it proved to be an “event”.

This is Wagner on a grand scale, scenically, vocally and orchestrally. Katarina Dalayman took on the role of Brünnhilde in Die Walküre and Gotterdammerung with Adrianna Pieczonka as Sieglinde. James Levine conducted the Metropolitan Opera Orchestra in four nights of opera that may be unlikely to be repeated for a long time.

One of the great delights of the summer is going to the Glimmerglass Opera Festival near Cooperstown in upstate New York. You can see four operas in three days and have beautiful Lake Otsego, verdant countryside and Cooperstown and its countless baseball memorabilia stores thrown in as a bonus.

In 2009 Glimmerglass offered Verdi’s La Traviata, Purcell’s Dido and Aeneas (both directed by Jonathan Miller), Rossini’s La Cenerentola and Menotti’s The Consul. That is quite an eclectic selection as it represents the baroque era, the modern and the 19th century with two familiar chestnuts.

Director Kevin Newbury provided a naturalistic and briskly paced production of Cenerentola that brought out most of the delights of the opera. The antidote to this was the dark, political opera The Consul which is set during the Cold War. With its gritty and sinewy music it brings to the stage the world of political repression described by Arthur Koestler and Alexander Solzhenitsyn.

Jonathan Miller gave a back-to-basics production of La Traviata that was both sensitive and sensible and in the end highly enjoyable. He also directed Henry Purcell’s Dido and Aeneas. He set the opera in modern times with cell phones and text-messaging being quite prevalent. Purcell proved in 1689 that opera could be written in English but unfortunately no one paid much attention to the genre. Name a few operas in English that were composed before the twentieth century!

I went to London twice and managed to squeeze in twenty-four performances. A production of Waiting for Godot provided a number of pleasures. It was at the beautiful Theatre Royal Haymarket and it had the rumbling voice of Ian McKellen and the talent of Patrick Stewart. A production to remember.

Juliet Stevenson gave a searing performance in Duet for One, a play about a virtuoso violinist struck with multiple sclerosis. A number of visits to the National Theatre, Shakespeare’s Globe, the Royal Opera House, Covent Garden and other theatres provided a feast of theatrical fare.

On a swing through France I went to three theatres that I had not seen before. I saw a beautiful production of Demofoonte at the Palais Garnier, the fabled Paris Opera, the Odeon Theatre de l'Europe in Paris for a not very funny production of Feydeau’s La Dame de chez Maxim and a respectable production of Gounod’s Faust at the Theatre du Capitole in Toulouse.

Opera in Toronto has become far more plentiful than ever. The Canadian Opera Company spreads its productions over fall, winter and spring seasons and provides significant variety and mostly high quality. Dvorak’s Rusalka and Stravinsky’s The Nightingale are two rarities that were combined with more familiar works like Fidelio and Madama Butterfly.

Opera Atelier is good for a couple of productions of baroque opera each year. It is a gem of a company that unfortunately lacks the funds to produce more works. Opera Hamilton is just an hour’s drive away and last year they provided a fine Madama Butterfly.

For the financially challenged, productions from the Metropolitan Opera are available in HD at movie theatres. There are many disadvantages to seeing opera like that but it sure beats not seeing productions from New York at all. Thus you could see Madama Butterfly on the big screen from New York as well as in Hamilton and Toronto, all in one year.

The Canadian Stage Company should be the premier producer of classics and exceptional new works but it rarely rises to the occasion. With its mixture of musicals, comedies and serious drama it seems to be trying desperately to find the proper repertoire to fill the theatre. Tarragon Theatre, Factory Theatre and Theatre Passe Muraille are more adventurous and experimental. They promote and produce new works and have the right to fail on occasion and to be always applauded for their efforts.

Soulpepper Theatre Company dominates the production of classics and off the beaten track works. The Stratford Shakespeare Festival and the Shaw Festival dominate the summer season and I reviewed their 2009 seasons several months ago.

There are numerous smaller companies that chase scarce funds and put on a few productions each year.

There is not world enough and time to see everything. I managed to see 130 productions during 2009. As usual there are some that were forgettable and forgotten almost as soon as I submitted my review to the paper. There are others that remain embedded in the mind. What is remembered is not necessarily “the good” but the exceptional be it exceptionally good or derisively awful. The most easily forgotten I suppose are those that required an extra large cup of coffee to keep me from falling off my seat. The others are productions that whet the appetite for more and more theatre and opera.