CLOUD 9 IS BIZARRE, ORIGINAL AND FULL OF SEX – WHAT MORE DO YOU WANT? 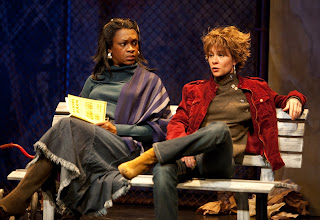 
Caryl Churchill’s Cloud 9, now playing at the Panasonic Theatre, is one of those mind-expanding plays that make your jaw drop. The author displays such a wild imagination, covers so many themes and provides such bizarre plot twists that you can barely keep up with a small number of them. The fact that there is a lot about sex does tend to keep the attention of some audience members intact.

The play starts with a simple premise. An English family in Africa in 1880, at the height of the British Empire. The whole family sings a jingoistic anthem and Clive (David Jansen), the head of the family, introduces us to its members. Betty, his wife, is the classic Victorian spouse who lives for her husband or so she tells us in a couple of rhyming couplets. She wants to be the type of woman that a man wants. Betty is played by a man, Evan Buliung.

Joshua (Ben Carlson), the black servant wants to be white so he is played by a white actor; Edward the son is played by a woman, Ann-Marie MacDonald, and Victoria, the daughter is represented by a dummy. Betty’s mother Maud is played by a black actress, Yanna McIntosh. Ellen, the governess, the widow Mrs. Saunders (both played by Megan Follows) and Harry the explorer (Blair Williams) are played by actors of their own sex but don’t count on them maintaining any semblance of Victorian morality.

Act II takes place in London one hundred years later historically but the characters are in fact only 25 years older than in Act I. Betty is now played by a woman (Ann-Marie MacDonald), Edward is played by a man (Evan Buliung), Victoria is played by Yanna McIntosh. Those are the only characters that survive from Act I.

Four new characters appear. Edward’s lover Gerry (Ben Carlson); Victoria’s husband Martin (Blair Williams) and Lin (Megan Follows) and her daughter Cathy (David Jansen). Cathy is the only part played by a man in Act II and that may be a bit of a relief when you try to figure out Who’s Who.

There are some very witty lines, and quick scene changes. This is surrealistic theatre that is perplexing and absorbing.

Director Alisa Palmer has a first-rate cast that can carry the extraordinary demands of the play. David Jansen plays the upright and uptight paterfamilias with many ironic twists in Act I and he plays the little girl Cathy in Act II. Ann-Marie MacDonald does superb work as young Edward in Act I and turns into Betty, a high-toned English lady in Act II, again with many twists.

Evan Buliung is the Victorian Betty in Act I and a raving homosexual in Act II. Megan Follows plays the governess and a widow full of wanton sexuality in the first act but becomes a modern lesbian pursuing pleasure in the second half of the play.

The superb Yanna McIntosh is Maud, the mother-in-law of Act I and the bi-sexual Victoria of Act II.

This is rare theatrical fare.

Churchill may be trying to cover more ground than can be done in an evening of theatre and there are patches of the play that are not as effective as others but one cannot deny that this is intelligent and intriguing theatre.