AND SO IT GOES – NEW PLAY BY GEORGE F. WALKER AT FACTORY THEATRE 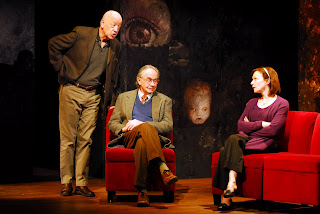 Peter Donaldson, Jerry Franken, Martha Burns
Photo by ED GASS-DONNELLY
George F. Walker has not produced a new play for ten year but he is back now with And So It Goes at Factory Theatre.

It is an absurdist drama that is perhaps best viewed as series of verses or images of a family that goes from the verge of disaster into total annihilation. There is very little that can be described as realistic or linear in the plot of the play except that it moves forward chronologically.

We meet Ned (Peter Donaldson) and Gwen (Martha Burns) in what should be an ordinary, middle-class living room. Gwen tells us that she is scared. The motif of fear will run through the play. She and her husband have every reason to be scared. They are a middle class couple with a daughter named Karen (Jenny Young). Ned is a financial advisor and Gwen is a teacher. They were in any event until they both lost their jobs and their world started spiraling downward.

In the first scene, their car is repossessed but that is only the beginning of their humiliation. They lose their house but they try to stay on their feet by Ned taking cooking lessons with a view to finding a job. He is a failure at that and is reduced to walking in front of some kind of store carrying a large sign announcing a blow out sale. The couple ends up in a shelter and Ned starts panhandling.

That is not all. Their daughter is suffering from schizophrenia. She is a drug addict and a prostitute and, of course, cannot get along with her parents. What else can go wrong?

That is a linear summary of the events of the play gleaned from the various scenes. If the incidents of the fall and humiliation of this family were presented as summarized, we would have a melodrama about a poor family being crushed by capitalism. Walker is not interested in writng that kind of play and most of us would not be interested in seeing one. The play consists of short scenes, almost vignettes at times, showing the family in different stages of their lives.

We see Gwen talking to a writer near the beginning of the play who turns out to be Kurt Vonnegut (Jerry Franken). He is dead, of course, and she is talking to him after his death. Ned talks with Vonnegut as well and the writer turns up in a number of scenes.

The daughter’s deterioration continues until she is beaten to death as she tries to pick up a john. After her death she appears as a rational and healthy woman talking with her parents.

Meeting and talking with Vonnegut and seeing their daughter as a healthy woman may be dreams. Are they the dreams of Ned or Gwen or of both? The scenes are presented realistically and there is no indication that either character is dreaming. And if they are not dream sequences what are we to make of them?

Another way of looking at the scenes is as if they are abstract art where the individual pieces do not make sense but the picture as a whole leaves the impression of what is happening to Ned and Gwen. It is an impression of their hell as they grapple with the terrible reality of their situation and grasp at the straws of chatting with a famous American writer and seeing their daughter away from drugs and prostitution. A fascinating play.

Walker directs his play and gets splendid performances from Donaldson and Burns, veterans of the Canadian theatre scene. Jenny Young gets to show her emotional range and talent as the deeply troubled daughter whereas Franken acts the more reserved Vonnegut.

This is the thinking person’s theatre which simply means that it is a play worth seeing more than once and trying to figure out all its angles.

And So It Goes by George F. Walker ran until March 6, 2010 at the Factory Theatre, 125 Bathurst Street, Toronto, Ontario. http://www.factorytheatre.ca/.
Posted by James Karas at 11:46 PM