HUSH TAKES US THROUGH NIGHTMARES IN PONDEROUS PROSE 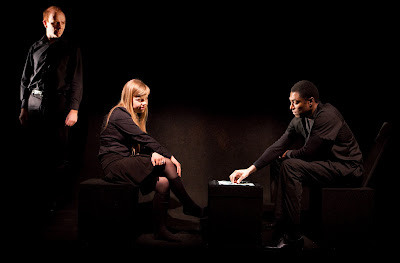 “This does not make sense” says one of the characters in Hush, Rosa Laborde’s new play, currently at the Tarragon Theatre’s Extra Space.

A play that is concerned with dreams and nightmares and matters spiritual may not be expected to make sense. Still, you may wish to understand something of what is going on and proceed from the beginning to the end of a one-act play with some enjoyment.

One cannot accuse Ms Laborde of lacking ambition. In a short play she tries to bring Greek mythology, Peruvian spiritualism, a witch doctor, rampant symbols of sacrificial lambs and, frankly, I don’t know what else. But rest assured it was all there.

We start with a simple premise of Lily (Vivien Endicott-Douglas), a 12-year old having a nightmare. She is a bright kid about to become a teenager and she is troubled. Her mother is dead. She is very articulate and her dentist father Harlem (Graeme Somerville), is trying to be supportive. He is named after the Dutch city and I am not sure that I caught the significance of that fact.

Harlem is involved with a very spiritual and spirited, if those are the right words, woman named Talia (Tara Rosling). At the end of the play there is a suggestion that she may be his long-dead wife but by that time maintaining any kind of interest in the play and its characters has become rather difficult.

The fourth character is Andre (Conrad Coates), another dentist who exhibits considerable charm. Coates doubles as the witch doctor of the dreams.

A play about dreams and nightmares cannot be expected to follow a logical sequence of events in its plotline but this one was so confusing that I was frequently bewildered about what the hell was going on.

World mythology is alive and well in these characters’ dreams and we are also told that Talia is named after the Muse of Comedy. The Muse’s name is usually written as Thalia but be grateful that we are told that much. You are on your own about the rest.

These people are very, very literate and they say some ponderous and some very ridiculous things. If you heard anyone talk like that you would scratch your head and wonder what part of the planet they are from. Maybe people get more articulate or just use more arcane language in their dreams and nightmares.

The acting talents of the four actors are very apparent despite the deficiencies of the script. Ms Endicott-Douglas can take on the role of any adolescent brat or genius or troubled girl and shine in it. Tara Rosling can do a good job even with bad lines.

Somerville gets some convoluted lines but he does a very good job in taking us through the nightmares whosoever’s they may be. Coates gets easier lines to speak and or he makes them seem easy. He carries the role Andre with aplomb.

A white sheet and some boxes covered with black cloth pretty much make up the set. All is black except for the sheet and a flower. There are some interesting sound effects and lighting but this is a play that can be produced on a string budget. The starry night at the end is quite effective.

Unfortunately I found little to enjoy in the play.