OTELLO FROM COC - GOOD PRODUCTION DESPITE SOME COMPLAINTS 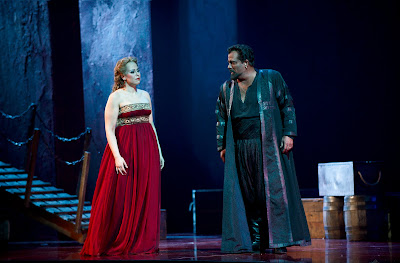 As you enter the Four Seasons Centre for a performance of Otello you see a huge eye on the curtain staring at you. Is this the eye that will provide Otello with the (non-existent) “ocular proof” of Desdemona’s infidelity?

For it winter season, the Canadian Opera Company has chosen Verdi’s penultimate opera and Georges Bizet’s Carmen. The latter is one of the most frequently produced operas while Verdi’s work is staged less frequently. In both operas, army officers and essentially decent men, kill women in rages of jealousy.

Otello was Verdi’s 27th opera and when it opened at La Scala, Milan on February 5, 1887 he was 74. His source of course was Shakespeare’s Othello and his librettist was Arrigo Boito, a master of the craft. Verdi had not composed an opera since Aida and that one had premiered sixteen years before Otello.

The last time the COC produced Otello was ten years ago and this year we are treated to a new co-production with the Welsh National Opera.

Scottish director Paul Curran delivers an economical and intelligent production. The set by Paul Edwards is grand without being overwhelming and except for a few essential items such as the set for the opening scene, a bed and curtains there are no Zefirellian scenic indulgences. The oversized, gold lion when the Venetian ambassador appears near the end of the opera may be the exception. There are intelligent touches such as having Desdemona watching from above as Otello’s ship approaches and a cross appearing as she is praying in the final scene. There are some directorial booboos but more of that later.

Otello is dominated by three characters: Otello, Desdemona and Iago. The opera is, of course, about emotional warfare and the ability of Iago to conquer Otello’s soul and turn the upstanding general, a man of vast military experience and wisdom, into a jealous monster. The victim of that monster is the lovely and pure Desdemona and the means is a hapless officer called Cassio.

American baritone Scott Hendricks was the most successful and impressive as the malignant Iago. In addition to having a fine voice, Hendricks managed to look and be evil, slimy, manipulative and simply frightful. He moved around the stage with ease and made a very effective villain. When he gave us his “Credo” he epitomized both immorality and amorality.

Italian soprano Tiziana Caruso was the blonde, pure-as-driven-snow Desdemona. She has a lovely voice especially at mid-range and was also superb in her lower register. She did not seem to handle the high notes successfully all the time but still made an effective Desdemona.

The title role was performed by tenor Clifton Forbis. He has a powerful voice and he is fantastic at full throttle. However I could not warm up to his voice at all times. There did not seem to be much emotional conviction and I don’t think Curran’s directing did much to make the final scene the heart wrencher that I expected.

You can’t have a successful Otello without a first-rate chorus. The opera opens with a loud storm and thunderclaps and the chorus is there of course and provides the vocal power for the Fire Chorus (“Fuoco di giovio”) and the boisterous drinking song (Chi all’esca”). The COC Chorus under Sandra Horst delivers the goods.

The first act ends with a beautiful love duet (“Gia nella notte”) between Otello and Desdemona. Verdi wants them to sing “dolce” as they express married love. The duet starts with Otello on the right side of the stage and Desdemona on the left side, a bit behind him. His anger is calmed down, he sings, by just looking at her. No doubt it is but it would help if he in fact looked at her instead of being on the other side of the stage. They finally do get together but a bit more care in putting the scene together would have heightened the effect.

Italian tenor Emanuele D’Aguanno was good as Cassio as was Canadian tenor Adam Luther as Roderigo. Mezzo-soprano Jamie Barton was a sympathetic and well-done Emilia.

The COC Orchestra was conducted by Paul Olmi in what was, despite some complaints, a good night at the opera.

Otello by Giuseppe Verdi opened on February 5 and was performed nine times until February 28, 2010 on various dates at the Four Seasons Centre for the Performing Arts, 145 Queen Street West, Toronto, Ontario. Tel: 416-363-6671. http://www.coc.ca/
Posted by James Karas at 10:06 AM