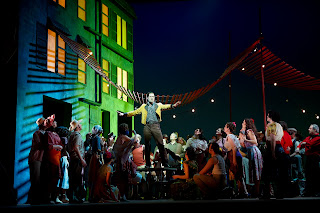 If two presumably rational men fall in love head-over-heels, as they say, with a woman and are prepared to risk everything that woman better be nothing less than sensational. Now when men indulge in that type of passion by “sensational” they do not mean a member of Mensa but someone with irresistible sexual appeal.

Two men who fall in love in that manner are Corporal Don Jose and Toreador Escamillo. The femme fatale is Carmen and they all meet in Georges Bizet’s opera that just finished playing at the Four Seasons Center in a production by the Canadian Opera Company.

It has been said hat if you don’t like Carmen, you do not like opera and should look elsewhere for musical nourishment. Carmen has so much that is both wonderful and familiar, from the habanera to the Song of the Toreador that it is impossible not to enjoy any competent production to some extent.

One can no doubt say that much and more about the COC’s production. It is competent and there are many enjoyable aspects to it. But it also falls short on a number of headings and one wonders why it should be so.

The role of Carmen was sung by Israeli mezzo-soprano Rinat Shaham except for the final performances for which she was replaced by Georgian soprano Anita Rachvelishvili. I did not see Ms Shaham and Ms Rachvelishvili was singing the night that I attended. She has a ringing voice with luscious tones. Unfortunately she did not exude much sexual electricity. She moved awkwardly, could not dance and she did not convince anyone that even dumb men would wreck their lives for her.

Speaking of dumb men, Don Jose is quite a prize. American tenor Garrett Sorenson replaced Bryan Hymel for the last two performances of the run and it was he who sang with Ms Rachvelishvili. The roly-poly Sorenson was vocally competent but as a lover he was simply wooden.

French baritone Paul Gay looked every inch the toreador and had a convincing swagger. He made a commanding Escamillo and Carmen should have no difficulty or hesitation in dumping Don Jos for this tall, dark and handsome dude who could sing up a storm.

The most successful performance was by Jessica Muirhead as the sweet peasant girl Micaela. She has a dulcet voice to go with her gentle personality and among the thieves and other low-lives of the opera she stands out like a beacon. Marvelous vocal work by Ms Muirhead.

The production is directed by Justin Way with sets designed by Michael Yeargan. Way has opted for spoken dialogue instead of recitatives. This should move the action at a faster clip but instead what we get is some really badly spoken French and not much speed. Now one could argue that Spanish soldiers and thieves cannot be expected to speak proper French and they may be right. But they will not speak with the strange accents of some of the COC singers either.

Way has some problems with handling crowd scenes and the effect is that of a largely static production that moves at a snail’s pace. In the opening scene there is a lively march by children. In this production thanks to an iron fence, the march is cut down to very little movement. There is no reason for that.

The costumes were non-descript but the red-hot shirts of the soldiers were a good indicator of the passion that was not generated by the performers and communicated to the audience.

The COC Orchestra was conducted by Rory Macdonald.
_____

Carmen by Georges Bizet opened on January 27 and was performed twelve times until February 27, 2010 on various dates at the Four Seasons Centre for the Performing Arts, 145 Queen Street West, Toronto, Ontario. Tel: 416-363-6671. www.coc.ca
Posted by James Karas at 4:39 PM