TALK HAS TOO MANY ASIDES AND TOO MUCH EDITORIALIZING 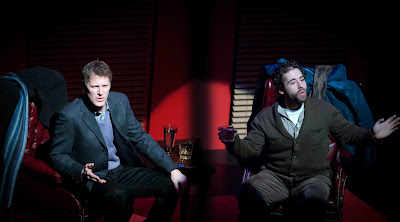 What is he thinking or what did he really mean when he said that?

Playwrights have developed several methods of providing that information when they want the audience to know more than what is being said. In Ancient Greek tragedy, the Chorus was used to comment on the action or on the characters. The favourite device in Shakespeare’s time was the aside where the actor spoke in an undertone that the audience heard but was presumably not heard by the other people on the stage. Asides are typically short remarks that provide a pithy editorial on the reaction or the feelings of the speaker.

The more extended method of describing inner feeling is, of course, the soliloquy which was mastered by Shakespeare.

Now imagine a play that is made largely of asides or soliloquies.

That is what Michael Nathanson provides in Talk which is now playing at the Jane Mallett Theatre in a production by the Harold Green Jewish Theatre Company.

Joshua (Michael Rubenfeld) and Gordon (Kevin Bundy) are old and dear friends. Gordon has met this wonderful woman named Clotilde and he wants Joshua’s opinion of her. They meet over a drink. The exchange a few words and the action is stopped (indicated by spotlights) and each of them editorializes to the audience. Stop, go, stop, go is the feeling one gets.

They talk about how Joshua feels about Clotilde for what appears like an eternity and Clotilde’s mention of one word catapults the two characters into the talk that dominates the rest of the play. She mentions the word Palestine. Joshua is a Jew and Gordon is a Christian and this leads into a discussion (subject to innumerable interruptions for asides) of the Israeli-Palestinian conflict.

Gordon ends up taking the Palestinian side. Israel has enacted racist legislation that will make the Nazis blush, he says. After decades of oppression, poverty and abuse, it is understandable that Hamas will resort to suicide bombings, he opines.

Joshua counters with the stated desire of the Palestinians is to murder every Jew in Israel. Jews are hated because they are Jews, he states, and they have no choice but to defend themselves.

The discussion between the two friends is interspersed with commentary about the meaning of friendship and the ability of friends to discuss a political topic without ruining their relationship. Is Jewishness more important than friendship is one of the questions to be asked.

The structure of the play blurs rather than clarifies the conflict in the Middle East and the conflict between the two friends. The asides and editorial comments interrupt the flow of the play without adding much to our knowledge about how the two men feel. After eighteen years of close friendship, they never got around to discussing the Middle East? Or is the whole thing brought up by Gordon’s new fiancée?

A third friend who heard all of this complained to the old Jew that his two friends held completely opposite viewpoints and that they both could not possibly be right.

“You are right” said the old Jew.

That is perhaps what is happening in the Middle East. Everybody is right as they kill each other. If Nathanson had striven to convey the wisdom of the old Jew, the play may have been more successful.

Director Ted Dykstra and Set and Lighting Designer Steve Lucas try to move the action along and change lighting to indicate different locations while using a minimum number of props.

Nathanson tries to provide some scaffolding for the discussion by creating some incidents in the play. But the lack of flow caused by the asides mars what could be a riveting dialogue about the many issues touched by Talk.