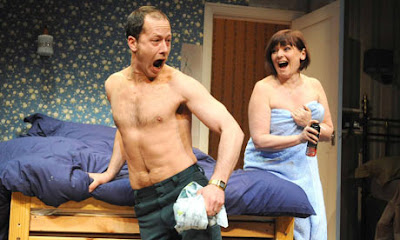 Tom Stoppard and Alan Ayckbourn are two of England’s most prolific playwrights and the chances of seeing one of their plays in London are, as they say, bloody good. Stoppard’s The Real Thing is currently playing at the Old Vic and Ayckbourn’s Bedroom Farce is at the Duke of York’s Theatre in London’s West End.

I first saw The Real Thing in 1984 in New York in a production directed by Mike Nichols with Jeremy Irons in the cast. It was so sophisticated and literate and funny it has stuck in my mind ever since.

I was perhaps hoping for a repeat of that performance at the venerable Old Vic and my expectations were sorely unfulfilled. Does memory play tricks on us and make past productions seem better than they were. Perhaps but the production at the Old Vic is simply not up to par. There are numerous witty and very funny lines but all dialogue needs timing. In this case some of the best lines were either killed or wounded by sloppy directing by Anna Mackmin.

For example, Max confirms to himself that his wife is unfaithful by finding her passport at home when she is supposed to be abroad. On her “return”, his wife asks him where he found her passport and he tells her that it was in a recipe drawer. That was the last place she would have looked in, she tells him.

“It was” he replies dryly. If there is a slight pause before the reply, it would be funny. Without the pause, the humor is lost. There was no pause in this production and there were numerous such examples of simple failure to take advantage of Stoppard’s humour.

The set for the first half consisted of a couple of couches and some furniture in front of a blank backdrop. Designer Lez Brotherston does add some bookshelves in the second half but we could have used some better sets.

The play covers love, adultery, political activism and writing (and there may be topics that I missed). Stoppard moves quickly and brilliantly and you find yourself at times enjoying the repartee at the expense of the content.

Barnaby Kay, Hattie Morahan, Toby Stephens and Fennella Woolgar have their moments of fine performances especially in the dramatic parts of the play but more careful directing would have borne greater dividends for actors and audience alike.

Alan Ayckbourn is nothing less than a play writing industry. He has written 74 full-length plays and has directed 300 plays. And that’s just the beginning.

His 19th play was Bedroom Farce and it opened in 1975. It made the rounds and in January 1979 it came to the Royal Alexandra Theatre in Toronto directed by Peter Hall and Ayckbourn himself.

The same Peter Hall has now staged a revival of the play at the Duke of York’s Theatre in London.

Bedroom Farce has three bedrooms (beds really – space is at a premium in London) and four couples. With the word farce attached to the title one may be led to expect frenetic action, sexual escapades and a lot of door-slamming as dictated by Feydeau and Company. Well, not quite.

Bedroom Farce is somewhat amusing, there are a few decent lines and you will end up laughing out loud a few times but that’s about it. Is this theatre for the tourists who want some relief from the endless parade of musicals?

Bedroom Left is occupied by Ernest (David Horovitch) and Delia (Jenny Seagrove), a middle-aged couple. They are about to go out for dinner and Ernest is worried about the roof and Delia is concerned about their son Trevor. A few chuckles.

In Bedroom Right we find Jan (Sara Crowe) and Nick (Tony Gardner). She is a feisty young woman who had the hots for Trevor at one time. Nick is bedridden and cannot go to the party that Jan will attend where she will run into Trevor. More chuckles and mild laughter.

Bedroom Centre is occupied by Malcolm (Daniel Betts) and Kate (Finty Williams) who are having a party. Trevor (Orlando Seale) and his batty wife Susannah (Rachel Pickup) will arrive separately and cause all the ruckus that will keep the play moving. Susannah will visit Trevor’s parents and both will drop by Nick and Jan’s bedroom. More chuckles and perhaps a couple of good laughs.

The scene changes from one bedroom to the next with speed but in the end, after a couple of hours, you wonder what you got out of it and was it worth after all, as they say. What was in the play or the production that a good television sitcom without commercials could not provide? I am not sure.

The actors deserve full credit for doing a fine job. Whatever the quality of the play, they got all the laughs that Ayckbourn put in.
Posted by James Karas at 5:27 PM