VOLPONE AND THE DUCHESS OF MALFI IN GREENWICH 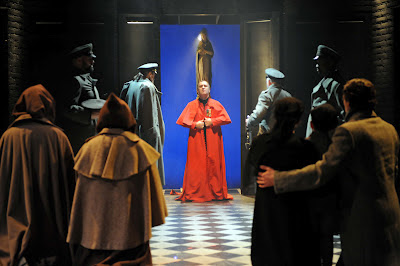 Ben Jonson and John Webster are two prominent English playwrights who are generally ignored in Canada. I can’t recall the last time there was a professional production of one of their plays in Toronto and as for the redoubtable Stratford Shakespeare Festival, it gives them a wide berth. Stratford has produced Webster only twice since the Festival was founded and Jonson is not exactly a frequent guest.

Things are different in England where Jonson’s Volpone and Webster’s The Duchess of Malfi could be seen back to back at The Greenwich Theatre London.

Ironically, the royally ignored Jonson (1572-1637) was a contemporary of Shakespeare’s and in fact Shakespeare acted in some of his plays. He was a colourful character and two facts come to mind when I hear his name. Whereas many playwrights dream of killing an actor, Johnson actually did. He was also thrown in jail for his allegedly anti-Scottish views. You don’t insult the Scottish when there is a Scottish king on the English throne.

Volpone is one of the greatest comedies of the English theatre. It is a play about greed and it opens with the brilliant line spoken by Volpone to his servant: “Good morning to the day; and next my gold: Open the shrine that I may see my Saint.” For Volpone gold and precious jewelry do not represent only wealth; they have become his god and are to be worshipped. Volpone kneels before his gold with reverence. The world has been turned upside down.

Volpone, played brilliantly by Richard Bremmer, is a citizen of Venice and with his wily servant Mosca (Mark Hadfield), he wants to hoard more gold. He comes up with a brilliant scheme to dupe other people who have a similar degree of avarice into parting with their money. He pretends that he is about to die and will leave his wealth to the person who pleases him the most.

Voltore (Tim Treloar), Corbaccio (Maxwell Hutcheson) and Corvino (Tim Steed) quickly arrive bringing gifts and much more. One of them is willing to disinherit his son; the other is willing to give his pretty wife to Volpone, all on the promise of becoming his sole heir.

Volpone’s undoing is not his greed but his lust. The pretty wife, Celia, will not succumb to his lechery and the whole scheme unravels.

The production is done in modern dress (more or less) with a few props. A couch for Volpone, a piano and a coffee table are about all that is required for the scenes in Volpone’s house and similarly few items for the scenes around Venice.

Hadfield is a wiry and effective Mosca and the greedy visitors are worthy of their names – vulture, raven, crow. I did not like Aislin McGuckin’s Celia. She is supposed to be a very beautiful woman after whom men would lust. In this production she is given an awful wig, an ugly dress and a horrible accent. Volpone would not risk all for a woman like that.

Director Elizabeth Freestone allowed Brigid Zengeni as Lady Would-Be and James Wallace as Sir Politic Would-Be to overact because the roles call for it.

If Volpone presents a world corrupted by avarice and people who are willing to betray most sacred human relations for money, it is nothing compared to the universe of The Duchess of Malfi. This is theatre of cruelty and bloodshed to make the most stout-hearted cringe.

Elizabeth Freestone directed this production as well using the same cast as in Volpone. Aislin McGuckin was given the title role and she gave a superb performance as a strong woman surrounded by evil, treachery, duplicity and cruelty. The widowed Duchess is forbidden by her brother the Cardinal (Max Hadfield) who has a mistress and her brother the Duke (Tim Steed) who lusts after her, from marrying again. She defies them, marries and has several children.

Her brothers strike back with unimaginable viciousness which includes strangling her.

The production is done in modern dress with a lot of military uniforms. The tradition of revenge tragedy requires the full panoply of costumes. The modern outfits took away from the whole genre despite fine performances. The only believable costume was that of the cardinal but the Catholic Church has not exactly updated their costumes.

Freestone tended to treat some scenes as if they were straight from an opera production. The characters faced the audience and delivered their lines. This may be fine in a duet or a quartet in opera but without, say, Verdi’s music it is not as effective in the theatre.

There were seven cameras spread around the theatre. Stage on Screen recorded the performance for release on DVD. If Canadian companies will not produce Jonson and Webster, maybe we can get them in DVD and watch them on the small screen. www.stageonscreen.com
Posted by James Karas at 5:42 PM