A WEEK AT THE NATIONAL THEATRE IN LONDON - Part 1 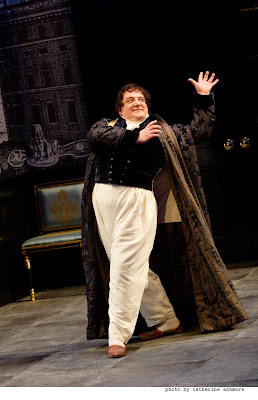 The National Theatre of Great Britain lists 14 productions on its three stages between March and June 2010 alone. You can probably see as many as half a dozen productions in one week and the breadth of works ranging from obscure classics to new plays is nothing less than impressive. To put it in context, you can see as many plays at the National Theatre in one week as the Canadian Stage Company produces in a whole season in Toronto.

My planned ten-day visit to London was extended somewhat by the ash spewed by that unpronounceable volcano in Iceland and I was able to see seven plays at the National Theatre alone.

The plays ranged from a 17th century tragedy (Women Beware Women by Thomas Middleton) to a new futuristic play about dementia (Really Old, Like Forty Five by Tamsin Oglesby). In between there was a 19th century Irish comedy (London Assurance by Dion Boucicault), an early play by Tennessee Williams (Spring Storm), new plays by Alan Bennett (The Habit of Art) and David Hare (The Power of Yes) and a play by Mikhail Bulgakov (The White Guard). Now there is breadth and depth in the choice of plays.


Bulgakov’s play takes place in Kiev during the civil war in Ukraine in the winter of 1918-1919 following the Russian Revolution of 1917. Bulgakov (1881-1940) was born in Kiev and lived to see some adulation and a great deal of derision during Stalin’s regime. The play was first produced in 1926 under a different title and Stalin liked it so much he saw it 20 times.

Bulgakov combines the personal lives of the Turbin family with the chaotic political situation and civil war brilliantly. Alexei Turbin (Daniel Flynn) is an officer in the Tsarist White Guard. His sister Elena (Justine Mitchell) is married to the pro-German Deputy Minister of War (Kevin Doyle). He works for The Hetman (Anthony Calf), the Ukrainian puppet of the occupying Germans.

The Hetman flees to Germany, Ukrainian Nationalists take over, the Bolsheviks arrive, there are numerous changes of regime and chaos and brutality reign.

The National does not shirk from war scenes that are extremely well done and are juxtaposed with scenes at home. This is theatre on a grand scale (really medium scale for the National) where an extraordinary cast provides a splendid theatrical experience all directed by Howard Davies.

If the civil war in Ukraine is too depressing there is much lighter fare in Dion Boucicault’s London Assurance. Ontarians will remember that the play was staged by the Stratford Shakespeare Festival in 2006 as a vehicle for Brian Bedford.

The production at the National is almost pitch-perfect. It is directed by Nicholas Hytner and with the likes of Simon Russell Beale, Fiona Shaw, Nick Sampson and Richard Briers it is comedy at its best.

The plot is as old as comedy itself. Sir Harcourt Courtly (Beale), an old fop from the city goes to the country to marry Grace (Michelle Terry), a teenage heiress. His son Charles (Paul Ready) and his bizarre friend Dazzle (Matt Cross) precede him to the country and Charles falls in love with Grace.

Boucicault treats us to some eccentric country folk like the beautifully named Lady Gay Spanker (Fiona Shaw), the gruff Max Harkaway (Mark Addy) and the doltish but hilarious Mr. Spanker played to wonderful effect by the now elderly Richard Briers.

Beale is simply a master comic. He can pose, do double-takes, preen and just take a few steps and have the audience laughing. A marvel.

My only complaint is about Grace, the lovely, sassy and sexy heiress who knows what she wants and how to get it. Terry can handle the role and her delivery of lines is impeccable. But Grace has to be a pretty maiden over whom fools and gallants would swoon. The almost-flat-chested and toothy Michelle Terry is pretty unlikely to turn heads or hormones in her direction.

Nick Sampson has the relatively minor role of the servant Cool. He is hilarious. He can get a laugh by simply staring and with his utter snobbishness and nose-up-in-the air demeanour he is the perfect example of a good actor maximizing the effect of a small role.
SPRING STORM

Tennessee Williams wrote Spring Storm in 1937 while a student at the University of Iowa. It was found with his papers in 1984. This is the play’s European premiere.

This is youthful Williams and the play is interesting both for its intrinsic value and as a precursor of what was to come from the great playwright. Most of the characters in Spring Storm will re-appear in his later work, more fully developed.

Williams goes for a dramatic setting from the start with the play opening on a windy bluff overlooking the Mississippi River. It is called Lover’s Leap.

The play is centred around the aptly named Heavenly Critchfield (played by the talented Liz White), a young and sexually attractive woman from a small town called Port Tyler on the Mississippi River.

Dick Miles (Michael Thomson) is a young man who is in love with Heavenly and wants to get away from Port Tyler. He is not well-educated and the best job he may be able to get will be as a labourer with the government.

His antithesis is Arthur Shannon (Michael Malarkey), rich, well educated but with some problems of sexual identity. He went to Oxford University but in his childhood he was hounded by his classmates and called a sissy. Heavenly witnessed a dramatic name-calling scene and did nothing about it. The experience still haunts Shannon.

Heavenly’s opposite is Hertha Neilson (Anna Tolputt), who is homely, lacks social status (her mother is a seamstress) and is dying for some attention and affection.

These four people interact with the citizens of Port Taylor. Heavenly is put under considerable pressure to marry Arthur as she is pursued by and has sex with Dick.

The play tends towards verbosity. Scenes go on after we have got the message and there is the tendency towards melodrama. Nevertheless, director Laurie Sansom has delivered a superb production of a play that deserved to be seen.

THE POWER OF YES

David Hare’s play The Power of Yes bears the subtitle “A dramatist seeks to understand the financial crisis.” That’s very nice, Dave, but why do you assume that we care what you are seeking to understand or if you achieve your goal it will be of interest to us. More importantly, how is that understanding, so eagerly sought by you, going to translate into good theatre?

To be fair, Hare has done a lot of research and talked to many important players in the financial and industrial sectors. Just as many either refused to talk to him or he neglected to get an interview with them. I suspect it was the former.

Before putting his ideas and research down on paper for a stage play, Hare should have offered the fruits of his efforts to say 60 Minutes or the fifth estate. These are well-funded network programmes that are capable of doing investigative journalism of the best kind.

Instead what we get is investigative journalism on stage. Twenty actors represent a couple of dozen (I am not sure of the exact number) known and unknown players in the events leading up to the financial crisis. The Author appears as a character (played well by Anthony Calf) and most of the other people appear as “talking heads” or more accurately “running bodies” on stage that need to be identified to us.

Many of the people he presents refused to have their identity disclosed and we have characters like “A Hedge Fund Manager,” “The Chair of a Mortgage Lender,” “A Leading Industrialist” and so on.

Alan Greenspan, the former Chairman of the Federal Reserve Fund appears in a video projection only and only his lips are shown. There are a few Americans including Myron Scholes but most of the talkers are British. The problem here is that the financial collapse was largely an American creation. The British followed suit as did Iceland and much of Europe. The Royal Bank of Scotland through its megalomaniacal CEO Sir Frederick Goodwin became a major player in the disaster almost single-handedly bringing the British economy to its knees.

George Soros, billionaire, philosopher, philanthropist (when you have $11 billion in your piggy bank how difficult can it be to become a philanthropist?) gets good press because he obviously agreed to talk to Hare.

A lot of people run on and off the stage making statements, explaining, defending, debunking. You do get a lot on information in the one hour and forty-minutes that the show runs but this is not particularly good theatre. Call BBC, CBS or CBC.

I will review the rest of the plays in a future article.
Posted by James Karas at 1:00 AM