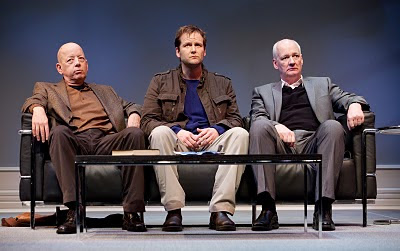 ‘Art’, the title of Yasmina Reza’s play is enclosed in single quotation marks to indicate that the word is used ironically. A work of art, a painting in this case, will play a significant role in the play but it will be the catalyst rather than the subject of the piece.

‘Art’ is a brilliant, witty, stimulating and humane play that is based on a very simple idea. Serge (Colin Mochrie), a dermatologist, buys a modern painting for a lot of money. The reaction of his two friends, Marc (Peter Donaldson) and Yvan (Evan Buliung) sets off a series of arguments that reveal a great deal about the men’s characters, their relations with each other and the nature and basis of friendship itself.

That is a lot of territory to cover in a play that lasts only eighty minutes without an intermission. Yet Reza and the current production by Canadian Stage succeed terrifically. The production builds up the humour of the play to gales of laughter and the underlying intelligence of the work and the complexity of the characters is never lost. This is damn good theatre.

Marc, the practical and domineering aeronautics engineer, controlled Serge’s tastes and perhaps thought. Serge has rebelled against that domination and expressed his independence by developing a taste for modern art that Marc finds incomprehensible. He in fact considers Serge’s painting shit.

Yvan is a pathetic character who has moved into the sale of office supplies, a job given to him by his fiancée’s uncle. He is spineless, an amoeba, as his friends call him, a conciliator and a man who wants to please people. When Serge and Marc argue his weak-kneed approach at conciliation causes them to turn on him rather than appreciate his docility.

Is friendship based on shared views and tastes or is it based on people sharing the views of one domineering person at the expense of their own or are human relations based on something more mysterious.

There are a couple of annoying things about the production. The play takes place successively in the apartments of the three characters. The three apartments are identical except for a painting on the wall. That is all that you need for the play.

For some reason director Morris Panych and Set and Costume Designer Ken MacDonald have added projections of the credits as well as black and white videos of the streets of Paris. The videos are shot from a moving vehicle and the Paris Opera and the Arc de Triomphe are recognizable as possible indicators of the part of town where the characters live. We see distorted images of the actors presumably looking through the keyhole at the arriving guests. This is totally out of keeping with the play.

The other annoying item is the pronunciation of the name Yvan. Whatever the pronunciation adopted by Panych for the actors it should be the same for all and all the time. All three of them at one time or another say something that sounds like Eevan, the last syllable being pronounced like a vehicle or Yvonne with the last syllable sounding like von in von Karajan. Get your act together, people.

All three actors provided polished performances. I will start by praising Buliung because Reza provides the poor schmuck with a long speech in which he outlines all the troubles that beset him from his approaching wedding to his whole life. Buliung performs it brilliantly bringing it to a pitch of emotional distress for the character and a summit of laughter for the audience.

Donaldson and Mochrie get great chances for comedy and intelligent repartee and they succeed superbly. Theatre for the thinking and laughing audience. No quotation marks needed.