THE MARRIAGE OF FIGARO, IL TURCO IN ITALIA AND LA BOHEME – OPERA IN TORONTO, LONDON AND HAMILTON 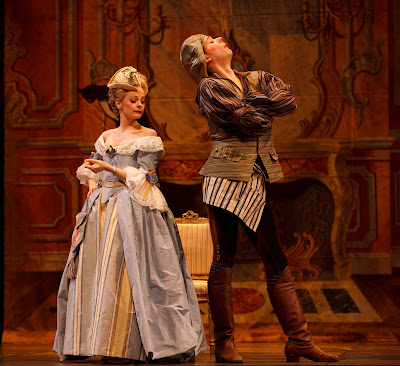 The Marriage of Figaro in Toronto, La Boheme in Hamilton and Il Turco In Italia in London is not a bad selection of operas to see within a few days of each other.

Opera Atelier’s new production of Figaro is elegant, colourful, well-paced, beautifully sung and in English. Director Marshall Pynkoski has chosen to give a commedia dell’arte-inspired production with lots of humour including some well-placed slapstick.

Bass baritone Olivier Laquerre as Figaro led the wonderful cast. His Figaro is light-footed, fast-thinking and very funny. The tall and lithe Laquerre sang magnificently. Soprano Carla Huhtanen was his lively and intelligent Susanna with baritone Phillip Addis as Count Almaviva and Soprano Peggy Kriha Dye as the Countess, with each one doing excellent work. Well done but I wish they would do something about the Count’s haircut. Wallis Giunta made a lively Cherubino.

The production is sung in English and raises the issue of the language of opera. I am rather schizophrenic on the subject. I resent it when funny situations are lost because they are sung in a foreign language and complain when the musicality of Italian is lost in the guttural horrors of English. This production brings the issue into focus. The comedy is much better because we understand the language. The singing suffers and at times I felt that the singers had molasses in their mouth. Take for example the round o’s of “Dove Sono,” the Countess’s gorgeous aria. Now try singing the same melody to the words “I remember.” It’s like moving from the beautiful, rolling hills of Tuscany to the flat Prairies. There is a myriad of such examples.

What do you do if you are tired of your wife and you want to get rid of her.? Well, if you are a Turk, you sell her. If you are Italian you punch the guy that wants her in the nose.

That at least is the advice given by Gioachino Rossini and his librettist Felice Romani in Il Turco In Italia, the hilarious comic opera now playing at the Royal Opera House, Covent Garden in London. There is much more such sage advice.

Rossini’s opera was first produced in 1814 but for some reason it has been overshadowed by his other works and is produced infrequently. That’s too bad

As the title suggests there is a Turk in Italy. Directors Moshe Leiser and Patrice Caurier have moved the action from the early 19th century to present day Naples. In fact most of the action takes place on the beach where you see cars and Vespa scooters parked on the sand.

Selim the Turk (Ildebrando D’Arcangelo) is visiting Naples. There he finds his misplaced fiancée Zaida (Leah-Marian Jones), the gypsy, accompanied by a lot of other gypsies. The action will get in higher gear when Selim also meets the lovely but empty-headed Fiorilla (Aleksandra Kurzak). To make things more interesting (and to provide a job for a tenor), Fiorilla is also pursued by Don Narciso (Colin Lee), a local playboy. One need hardly add that Don Geronio, Fiorilla’s husband is quite upset about the goings on and he would like to take revenge.

These activities are supervised by a Poet who follows events with great interest because they will provide him with a plot for an opera that he wants to write.

Italian bass-baritone D’Arcangelo is superb as Selim. Tall, dark and handsome, he is just the type that would dazzle women, gypsy, Italian and otherwise. He is vocally well endowed and struts around the stage with panache.

Polish soprano Aleksandra Kurzak is the perfect foil for both Selim and her husband Don Geronio. She is pert, sassy, agile and the classic airhead. She sang gorgeously.

Much of the comedy in the opera is owed to Italian baritone Alessandro Corbelli as Don Geronio. He is portly and has the expressive face that produces laughter. He has made a specialty of buffoonish characters but also sings a much broader repertoire. In any event, he was the hit of the evening.

The juicy male roles go to the lower voices in this opera but Rossini did cast Don Narciso, a sort of hanger-on, who does get a great aria and hits a high C. A good night for Colin Lee.

Thomas Allen at 66 is still younger than Placido Domingo and he is not ready to hang up his vocal chords. He plays the role of the supervisory Poet, a sort of ring-leader and commentator. He was suave and had no difficulty with the singing.

Set designer Christian Fenouillat chose simple, brightly coloured panels with a swath of blue in the middle to suggest the beach.

Leiser and Caurier used their imagination in providing a couple of plot twists at the end without interfering with the opera.

Conductor Maurizio Benini and the Royal Opera House orchestra kept a brisk pace as they inundated the hall with Rossini’s music.

Hamilton Opera finished its 30th season with Puccini’s La Boheme at Hamilton Place. Unfortunately, there were only two performances.

The evening belonged to tenor Roger Honeywell as Rodolfo. He was vocally and physically suited to the role and turned in a very good performance. I found Miriam Khalil a disappointing Mimi. Her voice did not seem big enough for Hamilton Place although she did display considerable emotion in “Donde lieta uscì” when she separates from Rodolfo.

Virginia Hatfield could have been a livelier Musetta and bass baritone Jon-Paul Decosse was not at his best as Colline.

One of the problems of the production was the set designed by Peter Dean Beck. The freezing garret is realistic enough but it does not cover the entire stage. Thus it looks like an ill-fitting structure that was plopped in the middle of the stage. The explanation may simply be that the set was borrowed and was designed for a different stage.

Michael Cavanagh directed the production and Cal Stewart Kellogg conducted the Hamilton Philharmonic Orchestra and the result, despite the limitations imposed by a limited budget, was an enjoyable evening at the opera.

The Marriage of Figaro by W. A. Mozart, presented by Opera Atelier, runs until May 1, 2010 at the Elgin Theatre, 189 Yonge Street, Toronto. http://www.operaatelier.com/
La Boheme by Giacomo Puccini was performed on April 22 & 24, 2010 at Hamilton Place, Hamilton, Ontario L8P 4Y2. http://www.operahamilton.ca/
Posted by James Karas at 1:49 AM