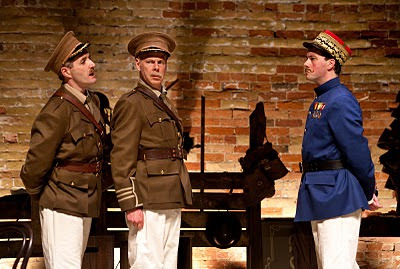 Oh What A Lovely War is not your conventional musical by many standards. All you have to do is look at who created it to realize that this is not just a team effort but a communal endeavour. It was created by Joan Littlewood, Theatre Workshop and Charles Chilton; Research by Gerry Raffles after treatments by Ted Allan and Others. How many people does that make?

The musical opened in London in 1963 and was made into a movie in 1969 directed by Richard Attenborough.

Oh What A Lovely War attempts to give a bird’s eye view of World War I by using popular songs from the early part of the twentieth century. It tells the story of the War from its declaration in 1914 to the bitter and catastrophic end in 1918. The songs and the dancing give the appearance of treating an awful subject with a light hand. R. C. Sherriff’s Journey’s End about life in the trenches was the usual way of representing the war at the time. The idea of songs and satire was quite new.

The songs and the vignettes mirror the high optimism and fervent patriotism at the beginning of the war. “Row, Row, Row,” “Belgium Puts the Kibosh on the Kaiser” and “It’s a Long Way to Tipperary” are belted out with gusto. There is even an extraordinary display of common humanity when the British and German soldiers exchange gifts in No Man’s Land during the first Christmas Eve of the war and sing Christmas carols. It is one of the most touching stories about the war and one that was never permitted to be repeated.

The characters are dressed in pierrot costumes to indicate, ironically of course, that this war is just a lot of fun, a lark in fact. The pierrot costumes are not worn by the army officers such as Sir John French and General Douglas Haig. The musical’s most savage treatment is saved for Haig who ordered massive attacks by British soldiers into German machine guns He was convinced that his decisions were guided by Providence and that he was doing God’s will.

The number of dead projected on a screen jars sharply with some of the songs but brings home the brutal results of some of the military decisions.

Oh What A Lovely War is a Brechtian musical and it needs to show the ugly side of the war more clearly. Several years ago Soulpepper produced Brecht’s Threepenny Opera and failed to evoke the grit and underlying ugliness of the situation. It was a sanitized version of the play and I had the same feeing about Oh What a Lovely War. At times it felt too much like a pleasant musical despite the satire and underlying brutality.

In other words if the war is to be presented as music hall entertainment if should show its teeth lest we miss the point.

Director Albert Schultz has chosen some Soulpepper stalwarts for the production as well as a number of Soulpepper Academy Artists. Oliver Dennis, Michael Hanrahan, Mike Ross and Marek Norman. They generated considerable energy and delivered an enjoyable production. If only it had teeth.