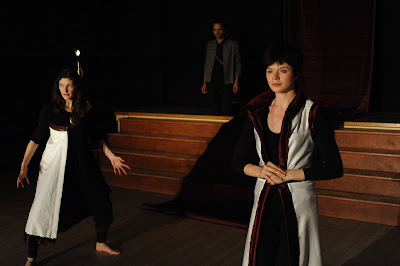 You can see Aeschylus’s Agamemnon in Toronto!
You may consider the exclamation mark a bit dramatic but try to recall the last time you could see any play by Aeschylus in southern Ontario.
In fact, productions of Greek tragedy in Toronto are about as frequent as balanced budgets – they are almost impossible to find. Or so I thought until a couple of weeks ago and I lived to be proven wrong. The corrective action has been taken by Michael Wighton who has directed a production of Aeschylus’ Agamemnon in a church hall.
Agamemnon was first produced in 458 BC and it is the first part of the Oresteia, the only surviving trilogy from Ancient Greece. It is by all accounts one of the great works of Western literature.
We don’t have much information about how Agamemnon was performed in Aeschylus’ time but we do know that three actors wearing masks played all the roles and there was a Chorus of perhaps a dozen men who spoke, sang and danced. The change of character was indicated by wearing a different mask and no doubt through changes in vocal intonation.
The play has six characters in addition to the Chorus. Wighton produces the play with only three actors who play all the parts. His is a bold re-imagination of the play and quite an achievement. He cuts out the part of Cassandra but otherwise seems to be faithful to the text in Ted Hughes’ translation.
The three actors are Carlos Gonzalez-Vio, Laura Nordin and Michelle Alexander. They tackle Aeschylus’ complex language and Hughes’ taut poetry with vigour and conviction. They enunciate clearly and modulate their voices almost operatically. They can tell the difference between speaking verse and mouthing prose and the result is a superb reading of the play.
Under the circumstances, the three actors play the Chorus in addition to all the other roles. There is some chanting, gesturing, screaming and dance movements but for the most part the Chorus becomes another speaking role in this production. The characters of the play are played by more than one actor. Clytemnestra, the central character, is played by all three actors.
There are some quirky moments in the production. One of the choral odes is performed as shadow theatre. A sheet is drawn across the stage and the actors recite their lines and perform dance movements behind the sheet. That is effective enough but it is followed by a rather silly scene where a panel representing the sea is raised and when ships are mentioned papier-mâché models of ships are shown. This produced some giggles and it seemed like a silly gimmick that has no place in Greek tragedy.
Ted Hughes has indicated an Interval near the middle of the play and Wighton has decided to have someone walk across the playing area with a sign that reads “Interval.” The play is performed without an intermission and the “Interval” sign produced giggles.
This is the debut production of Theatre Cipher and it looks like Greek tragedy on a very thin shoestring. The theatre is the hall of a church with a few raised seats that can accommodate about 50 people.
There is a raised area at the back that serves for a stage but the action takes place in the open area close to the audience. Props are minimal and costumes are non-descript.
One cannot have Greek tragedy without a Chorus and perhaps other paraphernalia. About half the lines of the play belong to the Chorus, after all. Michael Wighton has proved, however, that an imaginative director with three superb actors who pay attention to the language of the play can provide a fascinating approach to Greek tragedy.

Agamemnon by Aeschylus opened on May 22 and will play until June 5, 2010 at the Church Hall, Christ the Saviour Russian Orthodox Church, 823 Manning Ave. Toronto, Ontario. www.theatrecipher.com/
Posted by James Karas at 8:44 PM