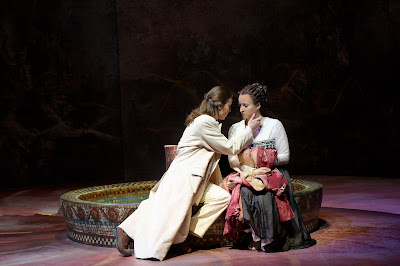 
The Canadian Opera Company wraps up its current season with two operas about the terrible fate of two seamen who tangle with supernatural powers. One of them is a Greek and the other is a Dutchman.

King Idomeneus of Crete runs into a violent storm on his way back from the Trojan War. He vows to the sea god Neptune that if he is saved he will sacrifice the first person that he sees on land. He is saved and the first person he sees is his son Idamantes.

A Dutch sea captain challenges the devil and vows to go around the Cape of Good Hope if it takes forever. He is condemned to sail the high seas and touch land only once every seven years. He can find redemption only if he finds a woman who will love him unto death.

The story of Idomeneus has been captured for the stage by Mozart in his 1781 opera seria Idomeneo and the hapless Dutch captain gained operatic immortality in Richard Wagner’s The Flying Dutchman which premiered in 1843.

Idomeneo is directed by Francois de Carpentries and boasts of Isabel Bayrakdarian, Kristina Szabo and Paul Groves, among others, in the cast. For the May 19th performance, they were all given a night off and were replaced by members of the Ensemble Studio, the training arm of the COC.

The singers were put through a number of weeks of training and rehearsals for the performance and given a chance to perform in a major production. The result was something well beyond an amateur production but it did have some rough edges, some infelicitous singing and awkwardness. Mozart was always at hand to carry the performance, however, warts and all.

Idomeneo being an opera seria the singers are frequently handed lengthy recitatives or arias and left on their own. They provide true tests of one’s mettle.

Tenor Michael Colvin, dressed like a South American dictator, epaulets and all, was a good Idomeneo vocally but I found his stage movements awkward, not to say incomprehensible. He seemed to go all over the place at times and I am not sure if it was for dramatic purposes or for exercise.

The role of Ilia, the captive Trojan Princess in love with Idamante, was split between Laura Albino in the first half and Simone Osborne in the second half. Albino got to do the bulk of the work in the first two acts of the opera but I think Osborne had the vocal edge on her in the third act where the workload is lighter.

Erin Fisher is listed as a mezzo soprano and she sang the role of Idamante. She has a very light, colourless voice and her Idamante came out as simply insipid. The role should probably been given to a tenor as is done frequently or to a fine mezzo soprano.

Ileana Montalbetti sang the role of Electra, the Argive princess. She has a commanding stage presence and a considerable voice. Electra is in love with Idamante and things are not looking good for her. What is worse, the Greek princess is about to lose the Greek prince to Ilia, a foreigner and a former enemy of the Greeks.

The result is that Electra is pretty angry, no, make that furious. Her rage is apparent throughout but really comes out in Act III in her aria “D’Oreste, d’Aiace”. Montalbetti has the vocal range for the role but she could not convey all the rage. Too bad in an otherwise fine performance.

The set was very effective suggesting scenes away from the ship on the right and the ships and sea on the left, including indications of scenes under water.

The Flying Dutchman receives a magnificent production with superb performances from the principals.

The current production is a revival of the COC’s 2000 staging directed by Christopher Alden with Set and Costume designs by Allen Meyer. The dominant stage prop is a ship’s wheel. There is a path stage front leading to the raised platform that serves as a ship’s deck and Daland’s home. It is effective without being overwhelming.

Russian bass baritone Evgeny Nikitin was the distraught Dutchman and he moved with poise and sang with superb sonority. Soprano Julie Makerov’s Senta displayed vocal beauty but her costume made her looking like a cleaning lady. I expected her to grab a mop and pail any minute and start scrubbing the deck.

Swedish bass Mats Almgren was a fine Daland and German tenor Robert Kunzli was very god as the hunter Erik who loses Senta to the Dutchman.

At the end of the opera, the Dutchman becomes convinced that Senta will not be faithful to death – after all she just betrayed Erik. But Senta wants to be faithful and when the Dutchman leaves her behind, she throws herself into the sea. The Dutchman’s ship sinks and he and Senta are transfigured and rise toward heaven. In the COC version, a more practical solution is found. Erik the hunter shoots Senta and the Dutchman goes up the winding stairs to god-knows-where.
_____