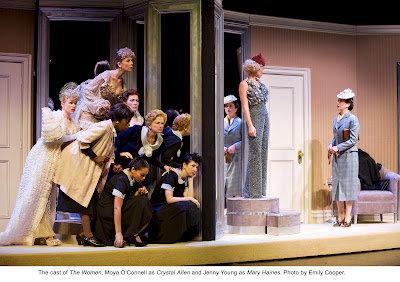 The Shaw Festival continues with two more openings: Anton Chekhov’s The Cherry Orchard at the Court House Theatre and Clare Booth Luce’s The Women at the Festival Theatre.

Chekhov called his final play “a comedy in four cats” but don’t expect too may laughs. He had much greater ambitions than producing laughter. In fact Chekhov gives a snapshot of Russian society on the cusp of dramatic changes; he portrays the end of an order that deserved its fate.

The people of The Cherry Orchard exist in the present and live in the past. It is an astounding portrait of a society centered on Mrs. Ranyevskaya (Laurie Paton) the owner of an estate with the cherry orchard of the title as its centerpiece. Mrs. Ranyevskaya suffered a double tragedy some years ago: the deaths of her husband and of her son. She left the estate and went to live in Paris where she met a ne’er-do-well and squandered her estate.

At the opening of the play she returns from France, broke and forced to sell her beloved cherry orchard. She and the others who depend on her appear to be oblivious to that fact that their world is crumbling around them. The estate is about to be auctioned off and some are having a party in one room while the men are playing billiards in another part of the mansion. The most significant event of the evening is that one of the men breaks a billiard cue.

Laurie Paton as Mrs. Ranyevskaya is aristocratic and statuesque but at the same time is pretty empty-headed. Her brother Gayev (Jim Mezon) is just as vacuous and ill-equipped to come to grips with reality.

The wealthy Lopakhin (Benedict Campbell), still smarting from his lower class background, acquires the estate and gets roaring drunk at his accomplishment. He wants to turn it into lots for cottages and make even more money. That is the future.

Boris (Neil Barcley) and the rest of the land-owning aristocracy display a society that is not so much moribund as already dead. The last character left on stage at the end of the play is the old servant Firs (Al Kozlik). Like most of the others, he is a left-over from another world. In fact when he was granted his freedom upon the emancipation of the serfs, he refused it and chose to remain a servant of the Ranyevskaya family. His death at the end is truly the death of the old world which did not deserve to survive.

Director Jason Byrne has chosen to pace the production at a leisurely and at times soporific gait. The characters speak slowly and the supposed Chekhovian pauses add very little. The Cherry Orchard is one of the great plays of the 20th century but I did not enjoy this production very much.

Luce’s The Women lists some 42 characters and it took 21 actors to play all the roles. All women, of course. The play opened in 1936 on Broadway and gave a personal view of the life of Park Avenue women in New York. They are catty, gossipy, bitchy, sneaky, conniving and quite funny.

Mary Haines (Jenny Young) is beautiful, rich and happily married. Unfortunately her husband has met a beautiful salesgirl at a perfume counter and has started working very late at the office. Mary’s gossipy friends find out about the affair and the result is divorce. That is what Miriam (Nicola Correia-Damude), Countess de Lage (Wendy Thatcher) and Peggy (Beryl Bain) have also done for different reasons and the four of them meet in Reno.

You need name tags to keep up with who is sleeping with whom but the play does have a satisfactory end with Mary outwitting the sleazy mistress who stole her husband.

There are some timing issues that director Alisa Palmer should have handled better. A prime example is when a manicurist starts babbling about Mr. Haines’s affair with Crystal (Moya O’Connell). The woman listening to this gets up to leave and is asked her name by the manicurist. She identifies herself as Mrs. Haines. The manicurist’s well-timed reply should have brought he house down. Unfortunately Palmer allows her to answer all too quickly and a great joke is squashed.

There are no mishaps in William Schmuck’s well designed sets and the gorgeous dresses. This is a veritable fashion show and it’s always nice to see the rich enjoying their money and being miserable with it at times. Despite some issues, The Women provides great summer fun.