APARTMENT 2012 - WILD AND HILARIOUS COMEDY WHERE YOU LEAST EXPECT IT 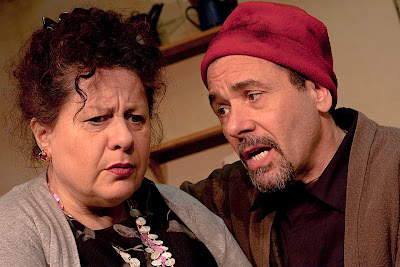 Apartment 2012 is the unassuming title of a hilarious play which just ended its run at the White Bear Theatre in London. It may be safe to say that the likelihood of most people having heard of the play or the theatre is on the slender side.

The play is the product of the fertile and wild imagination of Julian Sims, a British actor and writer. Apartment 2012 is his second play and it opened at the White Bear on April 6, 2010.

A Jewish family from New York is living in Communist Russia. No, not the the Russia of the late Soviet Union but the Communist Russia of the future. The family survived the nuclear war that destroyed capitalism and is now living somewhere near the Black Sea where the Mafia is running things. For some reason, this part of the world is a low radiation region. That’s just the background.

Barbara (Sue Kelvin) is a classic Jewish wife and mother. She is short and portly, loud, colourful and funny. When someone refers to her as “fat and ugly” her husband helpfully indicates that she is not ugly.

Her husband Sam (John Guerrasio) works in a factory, tries to put up with his wife (including the fact that she screams like a hyena during sex) and looks after the side business of the little garden that he has where he is not growing rutabagas.

Sam and Barbara have a nice-looking son who has a mental disease (according to them) – he is gay and he is caught making love to his boyfriend behind the couch.

Soon enough the Mafia man arrives asking for his cut of Sam’s business. He is willing to forego the debt, however, if he can make love to Barbara. She agrees and convinces him to have sex with her on the balcony – the balcony that Sam never got around to fixing. No clues here but check the floor number of the title.

This is only a partial summary of this hilarious bit of theatre. Kelvin can play Jewish mamas with hilarious results any day of the week. Sam, short and slim is the antithesis of Barbara and the result of course is quite funny.

Drew Hunter as the son Victor is very good. Some of the Russian accents are uncertain although one can hardy argue with Andrei Zayats’ intonations – he is a real Russian. Sam and Barbara speak with a New York accent.

The White Bear Theatre is the back room of a pub. I am being precise. You can have beer and food at The White Bear Pub before the performance and during intermission.

The backroom of the pub is about the size of an average family room. There are two rows of seats in an L-shape and they hold about 50 people. The stated mission of The White Bear Theatre Club, established in 1988, is to focus on new writing and Lost Classics [sic]. Its very existence seems miraculous; its longevity a marvel and the quality of Apartment 2012, the only play that I have seen there, simply exceptional.
___