A WEEK AT THE NATIONAL THEATRE IN LONDON – Part 2 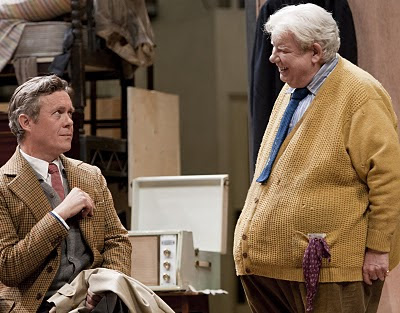 ALEX JENNINGS as Henry (Benjamin Britten) and RICHARD GRIFFITHS as Fitz (WH Auden) in The Habit of Art. Photograph by Johan Persson

The Habit of Art is theatre at its best. This is Alan Bennett’s new play now showing at the National Theatre’s Lyttleton stage in London.

What justifies such praise? Is it just temporary enthusiasm after an enjoyable evening out or is there enough substance to the play and the production to justify the panegyric?

The answer is “yes” to all. The play is about two famous Englishmen of the twentieth century, the poet W. H. Auden and the composer Benjamin Britten. The very idea of producing a play about two such people would induce snores. In the hands of Bennett, you are guaranteed some very witty dialogue at least. You get that and more.

Rather than giving us the more gory parts of their lives (they were both homosexuals with a penchant for young boys), Bennett looks at them as colourful human beings without avoiding the dirt under their fingernails.

Bennett becomes a character in his own play (played by Elliot Levey). The Author is watching a rehearsal of his play at the National Theatre. The director is missing and Kay, the Stage Manager (Frances de la Tour) is putting the actors through the script.

In other words we have layer upon layer of reality and unreality. The characters in the Author’s play that is being rehearsed become the actors in The Habit of Art.

Richard Griffiths as Fitz and the bizarre Auden gives a defining performance and it would be difficult to imagine anyone else trying the roles. Auden is a boozy, filthy slob (he urinates in the sink) who brings young boys to his residence for oral sex. He is also a brilliant poet and raconteur.

Alex Jennings is the composer who consults Auden about the libretto for his opera Death in Venice. We are treated to a brilliant discussion of the Thomas Mann’s novel and the function of a libretto.

Stephen Wight does a splendid job as the young male prostitute as does Scarborough in the role of Carpenter.

Frances de la Tour has a voice and an accent that I find simply delicious. It is like a superlative cabernet sauvignon wine, properly aged and aerated, which diffuses its taste and aroma upon being swirled around your mouth.

The Habit of Art combines those rare qualities of wit, literate fun, low humour and a theatricality that I unbeatable.

Murder, lust, greed, treachery, rape, poisoning - these were the staples of Jacobean tragedy. They were also the staples of many of Shakespeare’s plays but he did it much better.

Thomas Middleton (1580-1627) was a prolific writer but only a few of his plays are produced with any regularity. His 1621 tragedy Women Beware Women has received a major revival at the National Theatre.

The clerk Leantio (Samuel Barnett) marries the beautiful and wealthy Bianca (Lauren O’Neill). She gives up wealth and status for love. That’s one plot strand. Next: Isabella (Vanessa Kirby) is forced by her father Fabritio (James Hayes) to marry the moronic Ward (Harry Melling), who makes up in acreage what he lacks in brains.

These marriages go astray pretty quickly. The Duke of Florence (Richard Lintern) sees Bianca and falls in lust with her. Livia (Harriet Walter) arranges for the two to be alone and the Duke “seduces” Bianca. Rape is such an ugly word.

Livia also arranges for Isabella to have an affair with Hippolito, her brother and Isabella’s uncle.
As if that were not enough, Livia ensnares the cuckolded Leantio into her gentle arms and the stage is set for bloodshed.

Director Marianne Elliott and Designer Lez Brotherston have opted for a modern dress production on a monumental set that is all black. The revolving stage can indicate the ducal palace or less palatial scenes and it is very effective.

The plot unravels methodically with superb ensemble acting. Full marks go to Walter as the conniving and evil Livia who can be so charming when she wants to. The other two women are just as much victims of circumstances as aiders and abetters in the evils that befall them.

In a patriarchal society the real pigs are the men and you can choose between Hippolito, the incestuous uncle, the lustful and brutal duke or some of the other creeps of the play.

Really Old, Like Forty Five by Tamsin Oglesby playing in the small Cottesloe Thetare has a misleading title. It sounds like a light comedy with jokes about getting old, wetting your pants, farting etc. It is not. The play is about dementia and although there are many witty lines, it is a deadly serious play.

Perhaps it is two plays but it’s a muddle in any event. It takes place sometime in the future and we have the story of three siblings who are starting it to lose it. Alice (Marcia Warren), Lyn (Judy Parfitt) and their brother Robbie (Gawn Granger) display all the horrible signs of dementia.

We meet some members of their family and the final scenes are in a nursing home with all the concomitant horrors.

The scenes with the siblings are interchanged with scenes showing Monroe (Paul Ritter), a government policy official with an accountant (Paul Bazely) and a researcher (Tanya Franks) address various aspects of aging and dementia.

This is documentary and illustrative theatre about what the future (really the present) holds for the aging population. Interesting and depressing but not very good theatre.
Posted by James Karas at 1:13 PM