WAITING FOR THE PARADE AND FAITH HEALER FROM SOULPEPPER 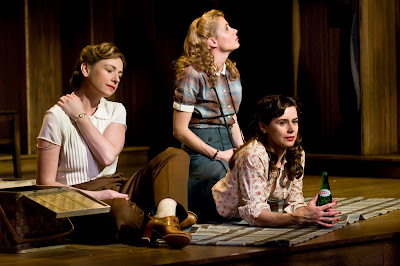 Five very different women are waiting for the parade. We area in Calgary during the early 1940’s and the women are waiting for World War II to finish and for the soldiers to come home. Playwright John Murrell built his 1977 play Waiting For The Parade on that rather simple premise. Soulpepper has staged a revival of the play in the Young Centre, in the Distillery District.

The five women tell their stories directly to the audience or engage in the everyday routines while waiting for the war to end and give us details about their lives.

Margaret (Nancy Palk) is an old, tall woman who is dying of loneliness. Her husband was imprisoned before the war and is now dead. One of her sons is in the army and the other one is arrested and imprisoned for distributing seditious flyers.

Catherine (Michelle Monteith) is a factory worker whose husband volunteered to go to war. He is declared missing in action. In her loneliness, Catherine takes up with another man and perhaps many other men.

Janet (Deborah Drakefield) is the officious and self-important supervisor of the work done by the other women for the war effort. She is a hard taskmaster, probably to compensate for her husband who stayed behind to read the news on the radio rather than join the army.

Eve (Krystin Pellerin) is married to a much older man who could not enlist. She is a frustrated woman who, like the rest of the others, is trying to cope. She is also a teacher and equally frustrated at her young students joining the army.

Marta (Fiona Byrne) is the daughter of a German with Nazi sympathies. He has been put in a detention camp and she is ostracized by the community because she is German. Murrell does not shy from depicting the bigotry and ugliness of society towards someone whom they consider different.

The vignettes of life during the war and before are evocative and moving. Murrell eschews any sentimentality and he certainly does not go for the “brave women that kept the home fires burning” syndrome.

The play moves slowly as we learn about the lives of the five women and the ordinary problems that they face in their daily life. The stories range from loneliness, to promiscuity to shame to frustration and physical danger.

Joseph Ziegler directs the five talented actors with finesse. All five women are convincing as characters and convey their lives quite well.

The set consists of a number of wood-paneled closets somewhere in a Red Cross facility where the women roll gauzes and produce other items for the war. Above the panels hang a number of soldiers’ uniforms and helmets. They are a vivid reminder that the men who wear those uniforms so far away from home are the reason for the women’s way of life.

Brian Friel’s Faith Healer, also playing at the Young Centre brings to mind an exercise in advanced creative writing. The project is to create three characters who describe similar events that all three experienced together.

Friel would come up with a marvelous character named Frank who is a faith healer. He is a talented performer, a mountebank, a charlatan and, at times, perhaps, a healer. He has some unsavoury characteristics but he fascinating.

His companion Grace is equally interesting. The daughter of a judge, she puts up with Frank’s travelling show and there is no rational explanation for her actions.

The third character is Teddy, the manager of the travelling show.

Each has a story to tell and Friel has written one lengthy monologue each for Grace and Teddy and two for Frank. He opens and closes the play.

Some of the incidents described, especially from different viewpoints are interesting and Friel’s prose can be excellent but is this really theatre? There is not all that much to distinguish it from a dramatic reading of a short story.

One cannot complain about the quality of the performances. The intense, dramatic showman Frank of Stuart Hughes is a performance to remember. Brenda Robins’ Grace is superb and Diego Matamoros as Teddy makes a very funny, sometimes endearing but always put-upon manager.

I must admit that during the lengthy monologues I found my mind wandering on occasion. Theatre is supposed to dramatize and bring prose or poetry to life. Here we got the prose where the enactment of some of the incidents described would have been incomparably better.

Director Gina Wilkinson mustered the fine performances from the actors but in the end it was a disappointing night at the theatre.