FINE PRODUCTION OF THE GOLDEN AGE FROM VILLAGE PLAYERS 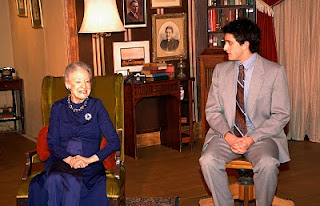 The Village Players have staged a very entertaining production of A.R. Gurney’s The Golden Age. The play, a three-hander, needs to be paced properly and requires an exceptional actor for the leading role. The Village Players were in luck in that regard.

The setting is a Manhattan brownstone in 1978 (or perhaps 1984, the date of the first production of the play which is supposed to take place “today”). A brownstone on the Upper Eastside of Manhattan means or is supposed to mean, in any event, money, beauty, elegance, class, taste. The owner is Isabel Hasting Hoyt, an old woman who had all those attributes in her youth in the 1920’s. Old age has had the inevitable effect on her physical appearance but money seems to have suffered the worst depletion.

Isabel knew everyone who was anyone during “the golden age” of her youth, including Hemingway, Picasso, T.E. Lawrence and others. But that’s not all. She also knew F. Scott Fitzgerald who gave her an unpublished chapter of The Great Gatsby.

Isabel has a niece, Virginia, who has gone through a couple of disastrous marriages, a great deal of booze and a bit more food than is absolutely necessary to keep hunger at bay. Not the type of woman that would attract a lot of men and Aunt Isabel is right to worry about her future.

Enter Tom, an ambitious writer and academic who wants to get his hands on the Fitzgerald manuscript. The reclusive Isabel demurs but sees an opportunity of getting a decent man for her niece and goes into high-gear female plotting.

Director Aaron Marcus does a deft job of keeping the sometimes creaky play moving along. He is lucky in having Patricia Delves in the role of Isabel. Ms Delves gives a wonderful performance as an old woman who has vivid memories of the greats of the literary and artistic scene of her youth and who retains her charm and cunning. She is so charming in fact that you wonder how many of her acquaintances are merely products of her imagination

She needs her wiles to outwit the young and aggressive Tom played by a wide-eyed Kyl Chhatwal. Poor Tom must maneuver between his ambition, his wife and the old woman’s niece. Will he get his hands on that manuscript?

Virginia (played by Lynn Zeelenberg), the means to the manuscript, with her drinking problem, and initial awkwardness is not a very enticing prospect. She is supposed to become more attractive as the plot develops but the transformation is not particularly convincing.

The Village Players or The Bloor West Village Players Theatre Company, to give them their full name, have been around for 36 years. Their theatre is in the basement of a commercial building at 2190 Bloor Street West, Toronto, premises that can at best be described as functional. The stage is the size of a suburban living room, the ceiling is low and there is a column at one corner of the playing area that impedes the view of some people.

None of that has deterred the Players or the audience. The company produces five plays a year and has been able to more than survive. This is, I suppose, what community theatre is all about. It used to be called amateur theatre which meant that you loved what you did, spent countless hours at it and got paid nothing for your efforts. The word amateur seems to have been devalued to mean inept and has been replaced by community theatre. So be it. It is theatre based on love of the craft, hard work and no pay. Inevitably they produce some clunkers but they produce far more fine theatre. This is community theatre that is amateur in the best sense of the word and deserving of kudos.

This 36th season’s productions by The Village Players were Cyprienne, an adaptation of Divorcons by Victorien Sardou and Emile de Najac, and Cliffhanger by James Yaffe.

The upcoming productions are The Price by Arthur Miller and Key for Two by John Chapman and Dave Freeman.