LETTERS TO MY GRANDMA TACKLES LARGE ISSUES THROUGH PRIVATE MEMORIES 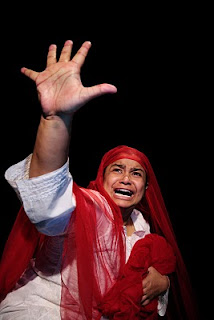 The multicultural makeup of the Greater Toronto Area has been noted, studied and commented upon extensively. One of the less edifying features of multiculturalism is the habit of some of the immigrants bringing over, and the continuation of old country conflicts here. This feature tends to be more reprehensible when others do it. When one ethnic group marches on Ottawa to protest the treatment of its people in the old country, it considers its action as a rational exercise of democratic rights. When other groups fight their internecine battles in Canada some people are far less sympathetic and simply retort that you should not bring your ethnic differences here.

Landing in Canada, enjoying the material benefits that it so generously bestows (for those that can get them) and even acquiring Canadian citizenship does not sever immigrants from their roots. However one may wish that they will leave their political, sectarian and religious issues behind, it is impossible to accomplish. They are part of the essential being of the immigrant and they can not be abandoned upon landing at the airport.

The experiences and memories (some real, some borrowed) of the old country have become sources for works of literature and the theatre and Anusree Roy’s play Letters to My Grandma, now playing at Theatre Passe Muraille Backspace is a good example of the genre.

The play, a one-woman show with numerous characters played by the author, takes place in two worlds: the world of India of 1947 and today’s Canada. The connecting link is Malobee, a Canadian woman who on her wedding day opens some letters about her grandmother’s life in 1947 India.

Ethnic cleansing and movements of populations became almost commonplace in Europe in the 20th century. From the Armenians to the Pontians, to the Jews and more recent examples in the Balkans, mass killings of people hold few surprises for us. When Britain left British India in 1947, it partitioned it into two countries: India and Pakistan. What followed was religious violence on a massive scale that resulted in the deaths of some two million Hindus, Muslims and Sikhs. More than 12 million people were displaced (more than the entire population of Greece).

Roy has attempted quite successfully to capture the fear, the utter terror, the hatred and the horrors of events that are incomprehensible. The plump, bright-eyed Canadian Malobee is dressed in a traditional white dress and is getting married in Canada in 2009. She opens her grandmother’s letters that describe events of the past. The scene switches to 1947 India and humanity is reduced to fear, terror, horror, begging for survival and searching for pity. In a powerful performance, Roy switches from one character to the next as her grandmother tries to survive and escape from a world that is sheer hell.

The play is performed on an empty stage and director Thomas Morgan Jones brings out an emotionally charged production that is quite riveting.

Letters To My Grandma is classically Canadian in its reach from Canada to India, from the immigrant to her roots half way around the world. The immigrants’ roots, however disparate and different, may be what unite Canadians or at least provide points of connection in a country whose people often seem to have very little in common.
The play is only 45 minutes long and it needs to be expanded or perhaps combined with another short play to make a complete night at the theatre.