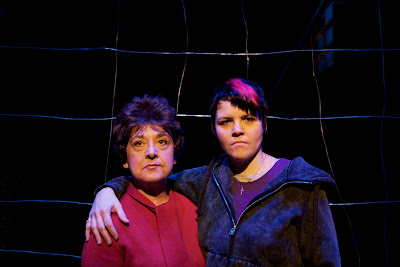 Maria Vacratsis and Michaela Washburn in SUCH CREATURES
Reviewed by James Karas
Two years ago Judith Thompson brought home what Saddam Hussein, the Americans and the British have done to the people of Iraq. Her play Palace of the End consists of three monologues through which the incredible human suffering brought on the Iraqis is described with unerring accuracy and unbearable pain.
Thompson told the story through “An American Soldier” who happened to be a torturer at Abu Ghraib, “A British Microbiologist and Weapons Inspector” who tells stories of torture and deception and by “An Iraqi Mother” who was tortured unspeakably by Saddam Hussein’s security forces.
It was an unforgettable night at the theatre.
Now Ms Thompson is back with Such Creatures, a play that consists of two intertwined monologues and once again she provides riveting theatre.
In Such Creatures, Ms Thompson has chosen two disparate characters very far apart in age and milieu to tell their stories. In the end they have a great deal in common.
The first character is Blandy (brilliantly acted by Michaela Washburn), a 14-year old girl living in contemporary Toronto.
At first blush she appears like a rebellious, disobedient teenager, tough, mouthy and to be shunned. She is being raised by an aunt and has been thrown out of a number of schools. She is in a Special Education Centre and is the type of teenager you would expect to find in Youth Court. She belongs to a gang and that will prove to be her downfall.
Blandy is also highly intelligent. She played one of three Hamlets in school and is able to relate to the troubled prince. Love of Shakespeare and references to Hamlet and The Tempest form one of the unifying features of the two monologues.
Blandy’s real name is Bernadette and she can relate to the young French girl who saw a vision of the Virgin and became a saint. In fact Blandy watches the movie The Song of Bernadette every week with her grandmother. She considers school the equivalent of purgatory and wants to tell the Pope of her discovery. In other words, she is not an ordinary punk.
The gang members will form the impression that she has betrayed them and in the end Blandy will be severely beaten and thrown on the ground.
The other monologue is by Sorele (a superbly serene and controlled Maria Vacratsis), a middle-aged woman who is facing her second and probably last bout with cancer. Sorele is a survivor of a Nazi concentration camp and she retells her experiences there as a teenager forty years later as she is approaching death.
In one of Ms Thompson’s piercing touches of irony, Sorele played Miranda in Shakespeare’s The Tempest and she has vivid memories of it. Shortly after that she was rounded up by the Nazis and sent to Auschwitz. She worked in a munitions factory making gun powder. She and her friends collect explosives spoonful by spoonful, enough to blow up a crematorium.
The two monologues are interwoven and aside from the Shakespearean connection the experiences of Blandy and Sorele have amazing connections. Sorele was at Auschwitz in 1945 and she is recalling her experiences in 1985 while Blandy tells her story in 2010. Standing up to a gang as opposed to the Nazis may seem far-fetched but for the individuals involved the result may not be all that disproportionate.
In the end when Blandy is on the ground after being pummelled senseless, she is lifted and comforted by Sorele and the two separate lives are united.
The play was commissioned by Nightswimming which describes itself as “one of Canada’s leading creators of new works of theatre, dance and music.”
Brian Quirt directs the production. He attempts to use as much of the stage and balcony of the small theatre as possible. When Sorele first appears she is in the audience, a few rows from the stage. The people in the upper rows were looking at her back and those in front of her had to strain their necks to see her or just listened to her. It is a minor hitch in a well done production.
The final result is literate, intelligent and brilliant theatre.
______
Such Creatures by Judith Thompson ran until February 6, 2010 at Theatre Passe Muraille Backspace, 16 Ryerson Ave Toronto, ON M5T 2P3. http://passemuraille.on.ca/
Tel. 416 504-7529
Posted by James Karas at 2:17 PM