Director Erica Whyman has staged a youth-oriented and fast-paced if somewhat ill-focused production of Romeo and Juliet for the Royal Shakespeare Company in Stratford-upon-Avon. It has become de rigueur to say and be inclusive and to try to attract the young to the theatre and that is quite right. Theatres need young people to replace the gray hairs and walkers that fill the auditoriums.

Whyman and Designer Tom Piper have chosen ill-defined modern costumes and do the entire production on an almost empty stage. The dominant prop is a large box that is open on two sides and bears resemblance to a bus stop shelter. It serves as the balcony, Juliet’s bier, a platform for the death scene and for some of the actors to climb on. Juliet dies in a chair and is carried to the top of the box where she made love to Romeo. 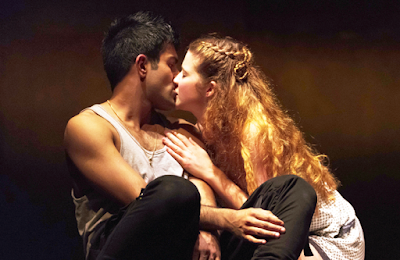 Bally Gill and Karen Fishwick in Romeo and Juliet.
Photo: Topher McGrillis/RSC
Bally Gill is the passionate and agile Romeo to Karen Fishwick’s clever and equally passionate Juliet. I liked them but I did not love them. Whyman may have tried hard to make them modern lovers so that the younger members of the audience may identify with rather than those of a certain age. Fair enough if that is the intention.

The vault of the Capulets consists of the aforementioned box with the ghosts of Tybalt and Mercutio standing on each side. There is no mystery or dread evoked by the scene at all. But Whyman goes a step further in reducing the fear of death and the presence in a vault with dead bodies. When Romeo sees the dead Juliet, he asks “Ah, dear Juliet, /Why art thou yet so fair?” For reasons that escape me the following line is deleted in this production: “Shall I believe / That unsubstantial death is amorous, / And that the lean abhorrèd monster keeps / Thee here in dark to be his paramour.” Juliet is so beautiful that the monster keeps her beautiful even after death because he is in love with her. Why would any director delete a beautiful line like that?

Mercutio is played by Charlotte Josephine as an athletic, mercurial, lithe young woman who is an adept boxer. She as he faces Juliet’s cousin Tybalt (Raphael Sowole) who is quite the opposite of Mercutio in size but he still gets the better of him.

Escalus, the Prince of Verona, is another role played by a woman but Beth Cordingly makes an authoritative and convincing ruler. Michael Hodgson is a very affectionate father to Juliet when he gets his way and powerfully monstrous when he is gainsaid.

Andrew French is a sympathetic Friar Laurence. He wears a loose white shirt and slacks and I could not figure out what type of friar he is. Even in today’s secular society friars look about the same as they did in previous centuries and I have never seen one dressed like French is in the role. Maybe I lead a sheltered life and there are friars in white shirts and slacks all over the place.

Juliet’s Nurse is usually good for a few good laughs but Whyman has Ishia Bennison play her pretty straight. She may be a bit raunchy but you have to use your imagination rather than feel her dirty-mindedness.

Whyman lays some emphasis on knife fights, presumably the weapon of choice of modern youth. Knives and, in the United States, guns, are weapons of choice but I am not sure that one can superimpose that fighting of the youth of Verona in times of yore on the youth of today. Do we really need to stretch that far to convince today’s youth to go the theatre?

Subject to these observations, this is a good production and Whyman did not need to go to such lengths to make it relevant to modern youth. With a good cast and intelligent directing, Rome and Juliet does fine on its own.
__________
Romeo and Juliet by William Shakespeare continues until September 21, 2018 at the Royal Shakespeare Theatre, Stratford-upon-Avon, England. www.rsc.org.uk