Seven Stones is a one-act opera commissioned by the Aix-en-Provence Festival that had its world premiere at the small Théâtre du Jeu de Paume on July 7, 2018. The opera is by composer Ondřej Adámek based on a libretto by Sjon. It is described as an a capella work for four singers and a twelve member choir but there are string and percussion instruments. It is sung in English.

The performance lasts 1 hour and 20 minutes but the libretto is rich in incident and range and is divided in some dozen parts. The Stone Collector (Nicolas Simeha) gets around, you may say. We find ourselves, among other places, in a city in Central Europe, in a bar in Buenos Aires and in the New Testament with the Adulterous Woman about to be stoned.  Needless to say a lot of people are hit on the head by a stone. 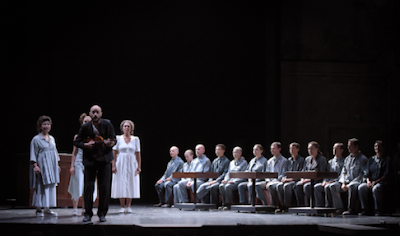 The cast of Orfeo & Majnun. HUGO SEGERS / FESTIVAL OF AIX-EN-PROVENCE
The libretto is printed in the programme in French and English and one can follow it as much as possible.  But, I think Adámek is striving for a new form of vocal expression. The four soloists (Simeha, Ann-Emmanuelle Davy, Shigeko Hata, and Landy Andramboavonjy) and the accents / axe 21 choir frequently sounded out chopped syllables at the beginning. The letter “s” is emphasized or elongated as if they have a serious lisping problem and other syllables are again sounded out as if they have a stutter or other speech impediment. After a while I wondered if they did not have a mental as well as a speech impediment.

The four soloists tell a number of tales including one about snow and the word is pronounced snow wo wo wo wo. Other words are similarly elongated. We hear the story of The Blind Poet of Buenos Aires, the tale of the Young Sailor from Boston and others.

A new work that may be trying to expand our horizons should not be judged hastily and I will wait to see the opera again or hear a recording. There is clearly more to it than I got on a first hearing.

The broad Cours Mirabeau, Aix-en-Provence’s main shopping street was turned into a theatre for a single performance of Orfeo & Majnun. A huge stage was erected for the performance of Western and Middle Eastern music based on the myth of the unfortunate Orpheus who lost his Eurydice and went to Hades in search of her.

The beautiful Layla (Nai Tamish Barghouti) has fallen in love with Qays but her father disapproves of the match and calls Qays, Majnun (Loay Srouji) meaning a fool. Barghouti and Srouji have beautiful voices and they sing some melodious love songs as he goes into the desert to live alone and she writes poetry about her love that she throws to the wind. Unfortunately her father forces her to marry someone else. 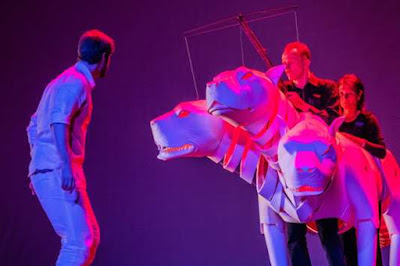 Orfeo & Majnun.
Photo Aix-en-Provence Festival
Orpheus’s (Yoann Dubruque) singing is of such surpassing beauty that animals leave the forest to listen to him. He and the lovely Eurydice (Judith Fa) do marry but alas she dies. Orpheus vows to go to Hades to rescue his beloved. He encounters Charon, the deliverer of souls across the River Styx and the three-headed dog Cerberus who guards the entrance. He convinces them to let him through.

We are led  through the tragic stories by a Narrator (Sachli Gholamaizad) and the rest of their stories follow with the inevitability of myths.

The opera was written by Moneim Adwan, Howard Moody and Dick van der Harst based on the conception of Airan Berg. The libretto is by Martina Winkel. It is directed by Berg and Winkel and conducted by Bassem Akiki.

More than a dozen choirs participate together with an intercultural ensemble of the Youth Orchestra of the Mediterranean. As you may gather, this is opera on a grand scale intended to entertain the thousands of people seated or standing in the Cours Mirabeau.

This is obviously and inter-cultural programme integrating Western and Middle Eastern music and singing. It is a marvelous, perfectly timed idea, done extremely well and a delight to watch and hear.
__________
Seven Stones by Ondřej Adámek opened on July 7 and will be performed a total of six times until July 17, 2018 on various dates at the Théâtre du Jeu de Paume. Orfeo & Majnun was performed once on July 28, 2018 at the Cours Mirabeau, Aix-en-Provence, France. www.festival-aix.com
Posted by James Karas at 4:51 PM