The Royal Shakespeare Company gives us a free-wheeling, modern production of Macbeth in Stratford-upon-Avon directed by Polly Findlay. It uses projected titles, children as witches and other unorthodox artifices as well as taking a casual attitude toward the text. There are some brilliant touches and some head scratchers but overall it is a dazzling production with an outstanding cast.

Macbeth, as everyone knows, opens on a blasted heath in Scotland with three scary witches babbling in rhyming couplets. Nope. This production opens with a large, very comfortable-looking bed centre stage on which an old man is sleeping. Three children appear wearing red hoodies and holding plastic dolls of babies. These cute girls are the three witches and they toss the dolls violently on the ground to tell us who they really are and then try to decide where to meet again. 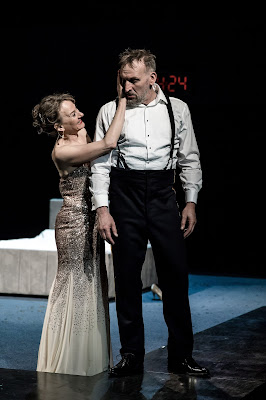 Niamh Cusack and Christopher Eccleston as the Macbeths. Photo by Richard Davenport (c) RSC
Unfortunately, they are still children with children’s voices and there is nothing sinister or mysterious about them. They do speak to Macbeth and Banquo promising kingship to the first and a royal line to the second. The witches, if you will, do appear again according to the text, but they make a few out-of-the-text appearances and at times are used to push props like the bed and a desk off the stage.

Findlay uses the Porter (Michael Hodgson) in ways that I simply could not figure out. He has a brief scene when he opens the gate to Macbeth’s castle and Shakespeare, generous to actors even is in minor parts, gives him some very good lines that evoke genuine laughter. He is the one who tells us the positive effect of alcohol on the desire for sex and its negative impact on the ability to perform it. Findlay has him sitting on the side of the stage almost throughout the performance. He carries a broom and interacts with some characters but whether he is supposed to be some kind of Chorus simply escaped me.

He is given a few lines that are usually spoken by other characters including telling Macbeth that Lady Macbeth is dead.

Designer Fly Davis splits the back of the stage horizontally in two creating an upper playing area. Quite brilliant because then we can have some of the characters above watching the others below.  Very effective staging.

Christopher Eccleston plays a very dramatic and frantic Macbeth. He shows us that Macbeth has the ambition but not the ability to be a true tyrant. He is in fact a bit of a coward who is pushed into acts that he would normally not contemplate.

This is in stark contrast to Niamh Cusack’s Lady Macbeth who shows us in a superb performance that she is capable of anything to fulfill her ambitions. Her example of her ability to toss a child and bash its brains out if it is in her way is a fine illustration of this Lady Macbeth. The witches smashing the dolls is obviously related to this Lady Macbeth. 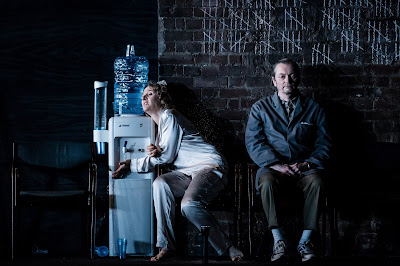 Niamh Cusack and Michael Hodgson. Photo by Richard Davenport (c) RSC
Edward Bennett is exceptional as Macduff. When he is told that all his children have been butchered by Macbeth’s henchmen he is stunned and all he can do is repeat the word “all” in shock and disbelief. Raphael Sowole is a bloodied and effective Banquo.

There are titles projected on the stage telling us about the play, I suppose. One of them is “THE FUTURE IN AN INSTANT.” Findlay wants to emphasize the importance of time by having a digital clock prominently displayed which shows the time some scenes are taking.

All of the components mentioned and many more add up to a brilliant production. The role of the Porter, the children as the weird sisters and other details may be somewhat confusing but the production leaves you bowled over by its effectiveness.
__________
Macbeth by William Shakespeare continues until September 21, 2018 at the Royal Shakespeare Theatre, Stratford-upon-Avon, England. www.rsc.org.uk
Posted by James Karas at 4:34 AM