THE LIEUTENANT OF INISHMORE – REVIEW OF BLOODY AND FUNNY PLAY

No doubt it is possible to imagine a more violent, gory and indeed disgusting play than The Lieutenant of Inishmore but it would not be easy. The play opens with a dead cat with half its brain dripping out. Next, a man is tied by his feet and strung up while someone threatens to cut off one of his nipples and make him eat it. The nipple-cutter has good manners: he asks the victim which nipple he prefers to be cut. People are shot at point blank range and blood is splattered all over. All of these actions are accompanied by laughter from the audience.

The Lieutenant is probably one of the funniest plays on the London stage. Martin McDonagh conceived the play during the 1990s when the IRA and the even more brutal INLA were actively murdering innocent people and children. He decided to write a black comedy about these brutes and the result was The Lieutenant of Inishmore. 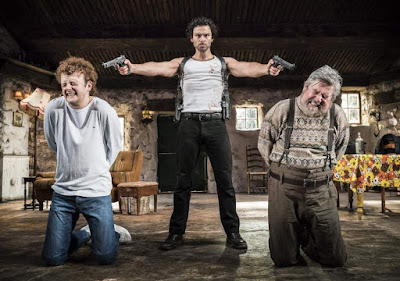 Chris Walley, Aidan Turner and Denis Conway in 'The Lieutenant of Inishmore.' Photo: Johan Persson
The play is set in a cottage on the island of Inishmore, Ireland. Davey (Chris Walley) a not too bright teenager with long hair, brings a dead cat to Donny (Denis Conway). The cat is Wee Thomas (and gets credit in the programme) and belongs to Padraic (Aidan Turner) who loves it. In the meantime, Padraic (the nipple snipper), who has been turfed out of the IRA for being too violent, is torturing a drug dealer called James (Brian Martin). The torture is terminated upon Padraic learning that his beloved cat “is in a poor way.”

He rushes off back home and threatens to shoot Donny (who happens to be his father) and Davey over the fate of his beloved cat.

Three IRA men arrive in the nick of time Christy (Will Irvine), Joey (Julian Moore-Cook) and Brendan (Daryl McCormack) and they meet an unhappy end. Padraic falls in love with Mairead (Charlie Murphy), Davey’s sister and you need not know the rest of the plot in deference to not spoiling your enjoyment of the play.

Between the shooting and dismembering of human corpses using a hacksaw (among other instruments) for easier cutting and witnessing blood all over, you will laugh. 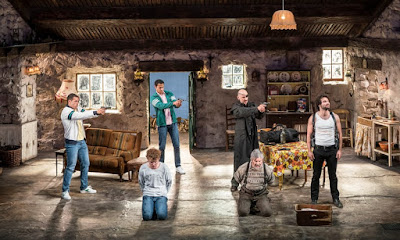 Foreground: Chris Walley, Denis Conway and Aidan Turner. Background: Julian Moore-Cook,
Daryl McCormack and Will Irvine. Photograph: Johan Persson
This is a very funny play which treats the creeps, torturers, murderers and animals of the IRA and INLA for what they are but without an iota of melodrama. McDonagh’s weapon is vicious satire and black humour and we laugh as we witness these atrocities.

Michael Grandage directs the play in a sure-footed fashion combining the cruelty and the laughter in a perfect blend. The talented cast with those delicious and at times tough-to-follow Irish accents is outstanding.

The play is set in a ramshackle cottage with the torture scene involving Padraic being done on a bare stage. You know that this is satire but you may feel a bit of guilt about laughing at cruelty, torture and killing, some of it over the fate of a cat. But this is the theatre of cruelty and laughter so just enjoy it.

It is a stupendous production of a superb play that you will and not forget for a long time.
_____
The Lieutenant of Inishmore by Martin McDonagh continues until September 8, 2018 at the Noël Coward Theatre, St Martin's Lane, London, WC2N 4AU, England. www.delfontmackintosh.co.uk