The Aix-en-Provence Festival is celebrating its 70th season in the gorgeous medieval city in Provence. If you were asked to plan a festival and had to choose a time, a place, weather conditions, theatres and, after 70 years, achievements, you could not do better than this one in southern France.

The 70th Festival runs from July 4 to July 24 features six operas among a rich and crowded program. The operas have a wide range from Mozart’s The Magic Flute to Seven Stones by Czech composer Ondřej Adámek, a new work commissioned by the Festival.

Pascal Victor / Artcompress © courtesy of the Aix Festival].
The Festival opened with Richard Strauss’s Ariadne auf Naxos  under the open roof of the converted Archbishop’s palace in a production directed by Katie Mitchell with the Orchestre de Paris conducted by Marc Albrecht.

Ariadne auf Naxos as envisioned by Strauss and his librettist Hugo von Hofmannsthal uses the story of the princess who was abandoned by Theseus on the deserted beach of the famous island as a springboard for many other things, most notably the encounter of opera seria with opera buffa.

“The richest man in Vienna” (Paul Herwig) is not given a name but he is putting on a posh dinner for his friends. He wants to entertain them with a serious opera, Adriane auf Naxos, a light comedy in the commedia dell’arte style called The Fickle Zerbinetta and Her Four Lovers and fireworks.

Fireworks of a different type start in the Prologue when the “artists” are told that Ariadne and Zerbinetta have to be performed simultaneously because there is just not time for both. The other fireworks have to start on time.

The Prologue consists of a number of temper tantrums by the artistes who must compromise their artistic integrity. The Composer (a suitably histrionic and vocally accomplished mezzo soprano Angela Brower) goes ballistic at the thought of being associated with the low class comedians. But there is the wily and marvelous Zerbinetta of soprano Sabine Devieilhe with her feet on the ground, her sense of humour in sharp readiness and her voice in ship-shape condition.  If there is any disagreement left, the Music Master (baritone Josef Wagner) brings them down to earth by reminding them that he who pays the piper, calls the tune.

The war between high art and low comedy comes to a head during the performance of Ariadne and the intrusion by the comedians. Soprano Lise Davidsen sings the languid and abandoned Ariadne who simply wants to die. Davidsen has a marvelous voice and Strauss provides her with some long and tough vocal demands which she meets with splendid flourishes and exemplary stamina.

She waits for Hermes to take her to Hades but instead is visited by Bacchus, god of wine and similar enjoyable duties. Tenor Eric Cutler has a supple voice and an excellent stage presence as the somewhat mysterious presence to inconsolable Ariadne. 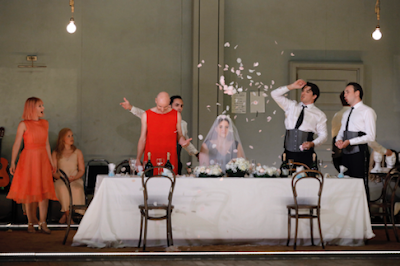 Zerbinetta and the Richest Man with comedians.  Pascal Victor /
Artcompress © courtesy of the Aix Festival
To some of us who may be less high-minded, the joy of the opera is the practical, open-minded Zerbinetta as sung by the delightful Devieilhe. While Ariadne dreams of the peace, purity and quiet of the kingdom of the dead in “Es gibt ein Reich,” Zerbinetta tells her in “Grossmächtige Prinzessin (O great princess!) to get off her ass (ok, she uses polite language) and have fun. There are lots of men out there and she can have as many as she wants. A delightful long aria done with panache and encompassing a philosophy of life and a trumpet call for the liberated woman that must have been shocking in 1916 when the revised edition of Ariadne premiered.

The opera is set in the mansion of the wealthy patron but we get almost no sense of life in the financial stratosphere. The preparation for the performances and the performances are done presumably in the servants’ quarters which in this case consist of two rooms that look like a living room and a dining room and can be found in any suburban house. The furniture is moved to make a playing area and a place for chairs but with bare walls and modern costumes, there is no feel of wealth at all.

Has “the richest man in Vienna” gone through a stock market meltdown? I think removing or failing to show the difference between the upper crust that can be purchased by money and the lower class artists is an unfortunate decision by Mitchell and designer Chloe Lamford.

Strauss’s complex score is performed by the Orchestre de Paris conducted by Marc Albrecht in a performance that started at 10:00 p.m. and ended with enthusiastic applause close to 1:00 a.m.
___________
Ariadne auf Naxos by Richard Strauss opened on July 4 will be performed six times until July 16, 2018 on various dates at the Théâtre d l’Archevêché, Aix-en-Provence, France. www.festival-aix.com