The Moderate Soprano is a genial, moving, funny and wonderful play about love. In fact, it is about two loves: the love of a woman and the love of opera. The lover is John Christie, a man of decency, integrity and generosity, and a man with a formidable will power who founded the Glyndebourne Festival. The woman he loved and who loved him was Audrey Mildmay, a soprano who was his partner in the creation of the now famous festival in the boonies of Sussex.

David Hare has fashioned a play that tells the love story of the Christies from the 1930s when the festival was started up to their old age and deaths. As John sadly tells us, all successful love stories end badly because they inevitably end in separation. 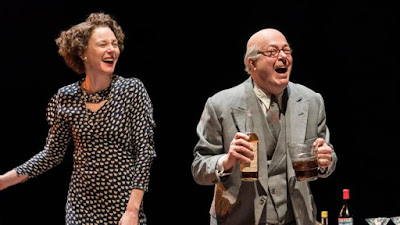 Nancy Carroll and Roger Allam in The Moderate Soprano© Johan Persson
The story is told in non-chronological order and Hare jumps from the 1934 to 1962. In 1934, Christie was sufficiently wealthy and ambitious to open an opera house that he started looking for talented people. He knew very little about who is who in the opera world but that did not deter him from approaching conductor Fritz Busch (Paul Jesson). At the end of the interview, Busch summarize their conversation by saying “You’ve never heard of me, I’m not available and I waste money. What other qualifications do I need for the job?” Christie smiles and Busch goes to England to conduct at Glyndebourne.

Professor Carl Ebert (Anthony Calf) follows as well as Rudolf Byng (Jacob Fortune-Lloyd) to create a Bayreuth on the lawns of Christie’s estate near Lewes, Sussex, a highly questionable venue to put it mildly. Christie, a genial man, believes in democracy as long as he decides what democracy is and is willing to listen provided he gets his way. After all he is paying the bills. He is strong-willed but never dictatorial and he does lose arguments.

There are funny and touching scenes. Christie wants to produce Parsifal and the three artists and his singer wife have to slowly convince him that it would be impossible to do that. Christie does not particularly like Mozart and they have to convince him that Mozart is the right composer for his opera house. They do.

He wants to impose his wife as one of the singers. She convinces him that integrity demands that she audition like everyone else. Humorous and touching scenes. 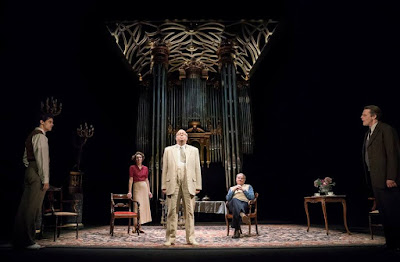 The Moderate Soprano © Johan Persson
Roger Allam as John Christie and Nancy Carroll make a loving couple as we see them in their youth and in old age and illness. Fortune-Lloyd is charming and arrogant as Byng in his days before he becomes manager of New York’s Metropolitan Opera. Jesson and Calf have their pride and perhaps even their arrogance but they are intelligent people, refugees from Nazi Germany and they have very little choice but to show class and tolerance and use the art of persuasion effectively.

There is generous use of projected photographs of the Glyndebourne estate and use of music during scene changes designed by Bob Crowley (set and costumes), Simon Baker (sound) and Luke Halls (video). Full marks to director Jeremy Herrin for capturing the atmosphere of geniality and the humour of the play.

A pleasure and a delight to watch a play about decent people in a civilized setting where a marvelous festival was created. And perhaps more importantly, a monument to John Christie and Audrey Mildmay for their great achievement that arose from love – their love for each other and their love of opera.
_____________
The Moderate Soprano by David Hare played at the Duke of York’s Theatre, 104 St. Martin’s Lane, London, WC2N 4BG, England.