Yota Argyropoulou and Michalis Konstantatos have, in their words, adapted and dramaturged Henrik Ibsen’s Ghosts and presented it at Peiraios 260 Theatre as part of this year’s Athens Epidaurus Festival. The new play is an extension and expansion of Ibsen’s play and in the end it is only tangentially related to it.

The adaptation opens on a happy note. Pastor Manders, Mrs. Helene Alving, her son Oswald and her maid Regina are opening an orphanage which has been built in honour of her late husband, Captain Alving. The Captain is praised effusively as a great man, a patriot and a generous benefactor of the children of the community. This is part of the plot of Ibsen’s play but in that version the orphanage burns down and is not insured. 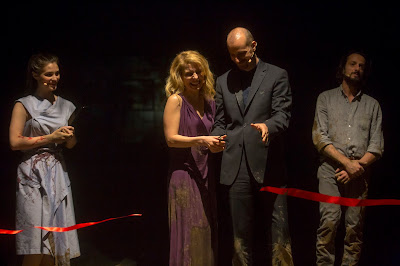 Ibsen’s play is a powerful condemnation of 19th century morality and hypocrisy as we witness revelations about the Captain’s true character as a drunken philanderer, Helene’s unhappy marriage, Oswald’s congenital syphilis and the servant Regina’s parentage.

All of these facts eventually come out in the Argyropoulou-Konstantatos adaptation but most of the play is the representation of a nightmare. I could not always tell whose nightmare it was. After the interruption of the dedicatory scene, the set consists of a deserted rocky place. There is extensive use of projected video and the point of most scenes is not always clear. We see Manders and Helene on the ground with the beautiful Helene trying to initiate sexual intercourse without getting any response from him but the scene is done in slow motion as in a dream which no doubt it is.

Helene meets Regina in a secluded area, undresses and has Regina undress. She seems sexually attracted to Regina and there is some physical contact but it falls short of consummation. Helene knows that Regina is her husband’s daughter.

There is a long scene between Oswald and Regina and they play a game of “truth or courage” which goes on for a tiresome and pointless length. I thought Pastor Manders had died but he came back to do a magic trick. He put Regina in a box and cut her in half in what is traditionally one of the great magical acts. There were references to Regina feeling that she had been cut in two and never put together again but did we really need to illustrate it in a way that has nothing to do with the play? Or is all fair in dramaturgy and nightmarish adaptation of a great play? 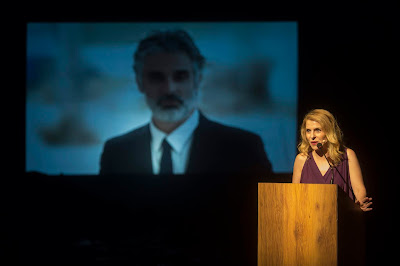 The passage of time is indicated by Manders and Oswald playing imaginary ping-pong over a period of twenty years. Is chronology of any consequence in a nightmare?

Konstantatos directs the play, the Set Designer is Kostas Pappas, the Costume Designer is Angelos Bratis and the music composer is Giorgos Poulios.

I should mention the actors and the parts they played but neither blindspot theatre group, the company behind the production, nor the Athens Epidaurus Festival make that very easy. The two small Festival programmes, one in English and one in Greek and the large 222-page programme name the cast as Yota Argyropoulou, Pinelopi Tsilika, Nikolas Papagiannis and Yorgos Frintzilas. No information in the programmes or on the website about who plays what part.

I guess that Argyropoulou plays Helene Alving and that leaves Pinelopi Tsilika as Regina. As to who plays what between Papagiannis and Frintzilas I do not know. Perhaps they can ask the people who put the programmes together why they can’t be bothered to identify the actors and the parts that they play. Antonis Myriagos appears in a video and I assume they means as the ghost of Captain Alving. I have no hesitation in recognizing the fine acting of the actors even if I can’t be sure of what parts they played.
_______________________
Ghosts  by Yota Argyropoulou and Michalis Konstantatos based on the play by Henrik Ibsen played  on July 17 -19, 2018 at the Peiraios 260 Theatre, Athens Greece. www.greekfestival.gr