The Aix-en-Provence Festival’s second offering for its 70th season is Sergei Prokofiev’s The Fiery Angel  (L’Ange de feu). This is an opera that is decidedly out of this world which presents a relentless and at times it seems endless phantasmagoria. Prokofiev finished the opera in 1927 but it was not produced at all until 1955 and then in Paris in French. He wrote the libretto based on the 1908 novel by Valery Bryusov.

The opera has not been completely forgotten but don’t hold your breath about seeing a production around the corner from your house any time soon. It may have been produced somewhere in Canada in the last sixty years but I can find no mention of such happening. 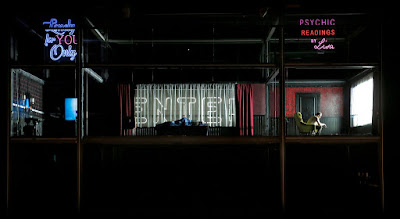 PASCAL VICTOR / ARTCOMPRESS
The Fiery Angel has a large cast but the central characters are three. Renata (soprano Ausrine Stundyte) had a vision of the angel Madiel when she was 8 years old. When she was 16, he appeared to her in a dream as a human being and promised to return eventually. Renata fell in love with Heinrich (bass Krzysztof Baczyk) who she is sure is Madiel but he disappeared. She meets Ruprecht (baritone Scott Hendricks) in a hotel where she is sprawled on the bathroom floor and he attempts to rape her.

That is just the opening scene. Ruprecht and Renata go to Cologne (the opera is set in Germany) in search of Heinrich and they meet a Fortune Teller (Agnieszka Rehlis), Mephistopheles and Agrippa the magician (  Andreï Popov), Faust (Krzysztof Bączyk) and an assortment of other characters, most out the realm of “normal.”

Director Mariusz Treliński and Stage Designer Boris Kudlička give us an unremittingly dark, sinister and hallucinatory atmosphere. Renata is clearly possessed and we never know where reality ends (if it exists at all) and where the world of delusion and nightmare begins.

There is mystery, cruelty and a sense of the unknown and unknowable. There are six young women singers and a number of dancers who perform a ballet sequence. Renata in her youth is hinted at from the beginning of the opera but in the final act entitled Retrospection we are in fact taken back to her school days. After all her nightmarish adventures, she ends up in a convent. We meet the Inquisitor and the plot may connect to the beginning. I will say no more. Spoiler alert.

The stage consists of two playing levels and the emphasis is on the unrealistic, the shadowy and the gloomy.

Ausrine Stundyte as the possessed Renata has a tough role to handle both in singing and in acting. She does a splendid job. There is no explanation about who Ruprecht is but he struck me as a travelling salesman of yore who ended up in a sleazy motel. There is nothing heroic about him but he sings and acts well in the role. 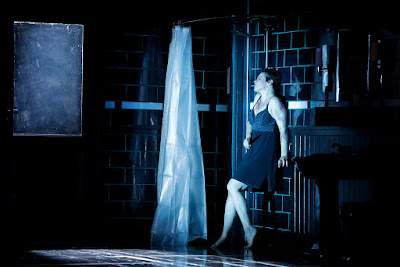 Ausrine Stundyte as Renata. PASCAL VICTOR / ARTCOMPRESS
The opera is done in modern costumes and there is much to be said against that. Agrippa, Faust, Mephistopheles, the Inquisitor and life in a convent are hardly recognizable in modern life. Surely a few centuries back would be more appropriate and resonate better with the audience, or at the very least something less obviously modern.

The music for this lurid tale is appropriately dissonant and gloomy. There seem to have been some comic scenes in the original but they were all deleted from the current production. There are some flashes of melody but there are no memorable arias or duets. It seems like a tough score and Kazushi Ono does superb work with the Paris Orchestra and the Choir of the National Opera of Poland.

The Fiery Angel shows bold programming and it is an opera worth seeing more frequently but, as I said, don’t hold your breath.
___________
The Fiery Angel  by Sergei Prokofiev opened on July 5 and will be performed four times until July 15, 2018 on various dates at the Grand Théâtre de Provence , Aix-en-Provence, France. www.festival-aix.com