THE KING AND I – REVIEW OF REVIVAL OF RODGERS & HAMMERSTEIN MUSICAL

Bartlett Sher’s magnificent revival of The King and I has finally reached Toronto after it was first performed in New York more than three years ago. It is a national tour production but the virtues of Sher’s directing are there with a few complaints about the vocal prowess of some of the cast.

The King and I premiered in a different world in 1951 and some of the differences are quite pronounced but you should take the musical at face value and enjoy it for what it is – a love story in a strange place, a long time ago. 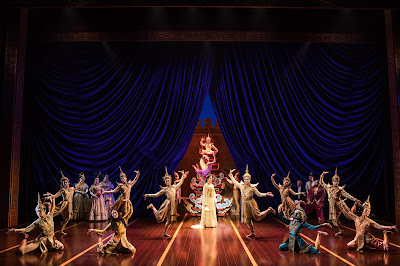 The cast of Rodgers & Hammerstein's The King and I. Photo by Matthew Murphy
Sher and the set and costume designer (Michael Yeargan and Donald Holder, receptively) grab our attention and dazzle us right from the opening scene. As the glittery curtain opens, we witness the arrival of a large ship into a harbour. It is dark, the sky is red and the mooring of the ship is impressive. With the help of Captain Orton (Baylen Thomas) we meet Anna Leonowens (Elena Shaddow) and her son Louis (Ryan Stout).

She is an attractive, gutsy widow going to the palace of the King of Siam to teach his multitude of children. She asserts her independence from the moment she sets foot in a country where she knows no one and does not hesitate to put her foot down against the Prime Minister (Brian Rivera).

Parts of the expertly designed set are turned around and moved quickly to change the scene to the palace. Here we meet the royal household and of course the King (Jose Llana). He is an interesting character. He wants to be scientific, civilized and learned. He reads the Bible and wants to adopt Western ideas. But he is a traditional absolute monarch to whom everyone bows, indeed grovels.

We are in the 1860’s and Anna is dressed in a beautiful gown with a petticoat that defined elegance and style in the Victorian era. In my unstylish eye it looked as if she was wearing a tepee that dragged behind her and she had to lift it every time she walked.

We delight in Anna’s pluck as she stands up to the King but also goes down to the floor because she is not permitted to sit or stand higher than him. The King in his mannerisms and attempts to sound Western is almost childlike. In his general attitudes he is a despot who considers women as lesser beings (so did everyone in the West) but the two are attracted to each other and develop a touching kiss-less love relationship. 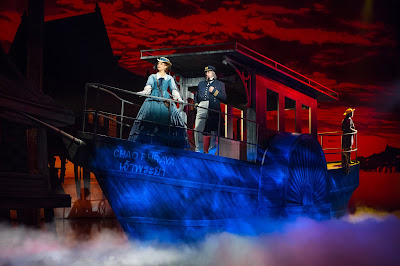 Elena Shaddow, Baylen Thomas and Rhyees Stump in Rodgers & Hammerstein's
The King and I.  Photo by Jeremy Daniel
There is a subplot involving the slave Tuptim (Q Lim) and her lover Lun Tha (Kavin Panmeechao). The lovers attempt to escape in a manner reminiscent of Uncle Tom’s Cabin. There is ballet sequence based on the plot of that novel which brings about the climax of the play.

The original production was choreographed by Jerome Robbins and the current choreography by Christopher Gattelli is based on that. The ballet sequence and the general chorography are simply splendid.

Songs like “I Whistle a Happy Tune,” “Getting to Know You” and “Shall We Dance” are vintage Richard Rodgers melodies that are a delight to hear. There are many of them in the show. Not all the singers had the vocal range one would want to hear but overall the singing was quite good.