The titles of most of Shakespeare’s plays give us some guidance about what we have on hand. The name of the main character is a favourite way of informing us about what to expect or some description such as The Merry Wives of Windsor, As You Like It, All’s Well That Ends Well and so on.

The Winter’s Tale has nothing to do with winter but it is a tale that is told. All we know therefore is that we will be told a tale. Shakespeare’s Globe tells us that tale in a well-thought out production that takes the tragic acts seriously and leads us nicely to the happy ending of reconciliation and marriage. The play has plot elements that stretch credulity and appear somewhat creaky but it was written near the end of Shakespeare’s career and it is a tale. 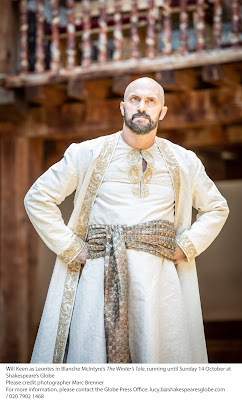 As Polonius reminds us, there are many kinds of plays but The Winter’s Tale does pose a problem. Tragedy and comedy are mixed in. We start with a tragic situation but the play has a happy ending that classifies it as a comedy. Maybe it is a romance or a pastoral or maybe we should just accept the play and not worry in which pigeonhole it belongs.

Director Blanche McIntyre and Designer James Perkins have to deal with the kingdoms of Sicily and Bohemia. The action starts in Sicily where King Polixenes (Oliver Ryan) is visiting his childhood friend King Leontes (Will Keen). After nine months, Polixenes insists that it is time he left. Leontes insists that he stay but to no avail. When Leontes’ wife Hermione (Priynga Burford), asks Polixenes to stay, he relents.

The Bohemians appear to be more sophisticated than the Sicilians at least in clothing. They wear tailored suits while the Sicilians dress like a people from a Balkan country that has not joined high fashion. This is broadly indicated but I thought that the difference is there and quite appropriate.

When Polixenes agrees to stay, Leontes goes into a fit of jealousy worthy of Othello and suspects his pregnant wife of being unfaithful with his friend. As the bald-pated Keen goes into paroxysms of jealousy, Polixenes and Hermione chat amiably like good friends in another part of the stage. 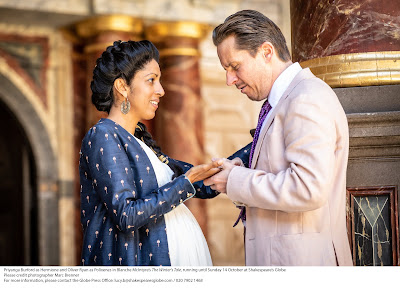 The scene turns uglier after Polixenes and Camillo (Adrian Bower) leave. We see Keen as the crazed Leontes, Burford as the regal Hermione and Sirine Saba as the strong and rational Paulina in fine performances as we go through the tragic part of the play. Hermione is put on trial and defends herself with dignity and honour and Paulina stands by her fearlessly as Leontes finally realizes that he is behaving unforgivably.

Hermione gives birth to a daughter who is abandoned on the coast of Bohemia to be discovered by a Shepherd. Sixteen years later the Old Shepherd (Annette Badland) and his/her son the Clown (Jordan Metcalfe) prove to be entertaining with some of the rustics in the neighbourhood. We have moved a long way from the events and atmosphere of the first three acts.

The dumb Clown, the crooked Autolycus (Becci Gemmell), the lovely daughter of Hermione, Perdita (Norah Lopez-Holden) and Florizel (Luke MacGregor) the handsome son of Polixenes will provide some complications but all of them will be resolved and you know perfectly well that the tale will not stop anywhere but at the matrimonial altar.

The tale is told but its complexity and structure do not leave all viewers happy despite the director’s effort to tell the tale well (which he does) and at a good pace. Some of us can’t warm up fully to the play but we accept the tale and rest in the knowledge that they all lived happily ever after.
______________
THE WINTER’S TALE by William Shakespeare continues until August 26, 2018 at Shakespeare’s Globe Theatre, 21 New Globe Walk, London. www.shakespearesglobe.com  The Norman Conquests (2013)
Photos by Cylla von Tiedemann