Michelle Terry, the Artistic Director of Shakespeare’s Globe Theatre, has exercised the prerogative of a boss and given herself the best and toughest role of the season. She plays Hamlet. The production is directed by Federay Holmes and Elle While and the result is eccentric and idiosyncratic which means you get the good, the bad and the awful.

Terry seems to be aggressively gender neutral and perhaps gender blind which is commendable to a point. Seeing Shakespeare’s plays done by all-women and all-men casts is a frequent occurrence and having some roles played by the opposite sex should not raise many eyebrows. Perhaps. 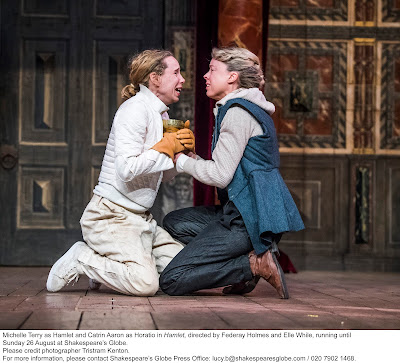 Terry’s Hamlet is a hyperkinetic prince who frequently uses his whole body it seems to make his points. He goes mad or pretends to be crackers quite early on and I felt that the directors did not tell Terry to follow Hamlet’s advice to the players. This Hamlet does not just use his hands when talking but flails his arms to near contortions. He puts on a clown’s suit from his first meeting with Polonius to almost the end of the play.

His histrionic delivery does not apply to all parts of his soliloquys which are delivered in almost matter-of-fact style. The Hecuba speech is a dramatic self-accusation of his failure to avenge his father’s death yet, as delivered by Terry, it does not rise to any meteoric level of emotion. For “To be or not to be” Terry kneels at the edge of the stage and speaks to a few of the yardlings in front of her.

She does a superb job in the bedroom scene where Hamlet attacks his mother for her betrayal and murder of his father. Here Terry shows strength and superb delivery of her lines.

Ophelia is played by Shubham Saraf, a tall young man, dressed in a nice gown that brought to mind high school casting. On high school productions, you take what you have and not what you want. The directors’ and Terry’s choice was not that grim but in this case it was ridiculous. He did not fit the role in any way. He did a much better job as Osric. 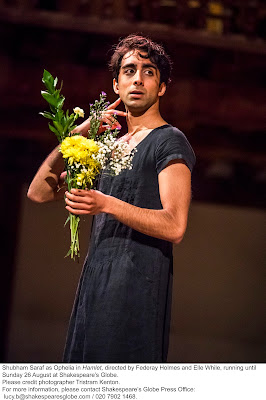 Laertes is played by Bettys Jones, a spitfire of an actor who does a good job in the role. She would have made a fine Ophelia to Saraf’s Laertes if it were not for perverse gender swapping.

Rosencrantz and Guildenstern are marginal characters, good for few laughs, even though you may wonder about Hamlet having them as friends at university. Rosencrantz is played by Pearce Quigley who has a white beard and is clearly a man of a certain age and could be Polonius’s brother. Let’s assume that Wittenberg accepted senior students. Guildenstern is played by Nadia Nadarajah who is unfortunately a deaf-mute. The biographical note in the program states that she trained at the International Visual Theatre in Paris and has considerable acting experience. Guildenstern is a speaking role and sign language cannot replace what he/she has to say. Giving people with disabilities opportunities is laudable but it should be in roles that can be adapted to their abilities. In this case, it simply did not work to put it politely.

Colin Hurley does a fine job as the Ghost, the wonderful role of the Gravedigger and a Player. The Ghost, however, is not really a ghost. During the scene on the parapets of Elsinore, he touches his son. When the Ghost appears when young Hamlet is haranguing his mother, he puts his arm around his son’s shoulder in order to restrain him. Interesting conception of a ghost.

The directors find humour in a number of places. When Polonius (Richard Katz) delivers his lengthy advice to Laertes, for example, there are pauses and intonations that make it quite funny.

The costumes for which Loraine Ebdon-Price is credited as Supervisor seemed to consist of whatever London’s equivalent of Malabar’s had on hand. The play takes place sometime in the past and costume need not play any significant part.

Eccentric? Idiosyncratic? I revise my opinion downwards when thinking of poor Ophelia and Guildenstern but I will leave it at that.
__________