It has taken the Royal Opera House, Covent Garden more than forty years to roll out a new production of Lohengrin but the result is vocally outstanding with truly exceptional production values form David Alden.

Brilliant vocal artistry is provided by tenor Klaus Florian Vogt as the heroic knight Lohengrin who demands anonymity. His vocal chords are a precision instrument that can rise to high notes with power and sing lyrical passages with tonal splendor. 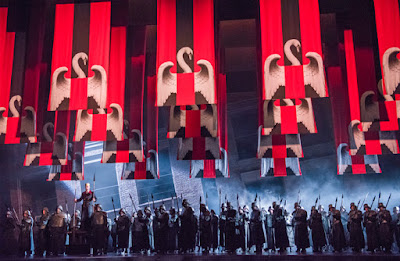 Lohengrin at the Royal Opera House, London. Photo: Tristram Kenton
Irish soprano Jennifer Davis stepped in to replace the indisposed Kristine Opolais with exceptional results. Poor Elsa has much to contend with as a woman accused of killing her brother. She is saved by the would-be nameless Lohengrin only to be maliciously misled into betraying him and herself. She needs strength of character, beauty of tone and has the Achilles heel of weakness to doubt her savior. An outstanding performance.

Baritone Thomas J. Mayer has sung the role of the nasty and ambitious Friedrich von Telramund all over Europe and is making his Royal Opera debut in the role this season. With his resonant voice and stage presence he has all the equipment for a superb performance which he provides. His character’s partner in sorcery and evil is Ortrud sung by dramatic soprano Christine Goerke in an equally well done performance.

Bass baritone Kostas Smoriginas with his commanding and booming voice served as the Herald.

The Orchestra of the Royal Opera House and the Royal Opera Chorus are conducted by Andris Nelsons and produce music of extraordinary power and beauty. When the full orchestra, chorus and soloists are mobilized, for example, after Lohengrin’s victory over Telramund, they produce a sound that is so thrilling that it transports you to another dimension.

David Alden brings some intriguing and in the end fascinating ideas to the opera. With Set Designer Paul Steinberg and Costume Designer Gideon Davey, he sets the opera in a devastated city after the war. The action takes place in a bombed building where only the outer walls have survived.

It becomes slowly clear that there is a power struggle among Telramund, King Heinrich (finely sung by Georg Zeppenfeld) and Elsa who represents her brother Gottfried, the rightful duke.

Alden saves us from having to watch a swan drag Lohengrin’s boat unto the scene. Judicious use of lighting suggests his arrival as the knight who will fight for Elsa and that is all we need. 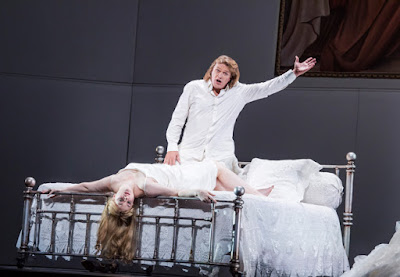 Jennifer Davis and Klaus Florian Vogt in Lohengrin at the Royal Opera House, London.
Photo: Tristram Kenton
But the swan or swans are not entirely left out. Near the end, as Lohengrin is about to depart because he was betrayed into having to reveal his identity, large red and black banners with white swans emblazoned on them are dropped across the stage. They are frightfully similar to the large banners with swastikas that were used by the Nazis.

It is an unexpected and startling scene. As Lohengrin walks quickly off the stage and disappears. Elsa falls to her death, the banners come crashing down and the old order disappears. Gottfried, the rightful duke appears, and order is restored. I found the scene breathtaking and the production awesome.
__________

Lohengrin  by Richard Wagner opened on June 7 and will be performed on different dates until July 1, 2018 at the Royal Opera House, Covent Garden, London, England.
www.roh.org.uk