Miles Potter directs a highly commendable production of Long Day’s Journey Into Night, Eugene O’Neill’s long-winded family saga for the Stratford Festival. It plays in the small Studio Theatre which has the advantage of intimacy and the issue of limited space.

Long Day’s Journey tells the story of the Tyrone family. James Tyrone is a one-role matinee idol who sold his soul to Mammon and abandoned Melpomene (maybe). He rose from poverty and did amass some wealth but he could not shake off his years of hardship and remained a miser all his life. He was convinced of his great acting talent and recalled or perhaps imagined playing opposite the great Edwin Booth and alternating the roles of Othello and Iago with him. 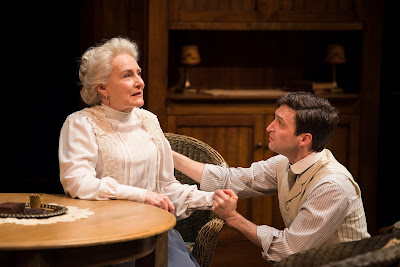 Seana McKenna as Mary and Charlie Gallant as Edmund.
Photography by Emily Cooper.
It is a devastating portrait of O’Neill’s father and Scott Wentworth does a superb job in the role. He shows us James as a heavy drinker, an arrogant man, a selfish husband and a repulsive miser who keeps his whisky locked up and can tell if someone has had a drink from an open bottle. His sons are forced to pour water into the bottle to fool their father.

Wentworth does a superb job of presenting all those traits in Tyrone but I missed the matinee idol. This Tyrone is the one-role actor who thinks of himself as a star while regretting prostituting his talents for money but his star quality is never shown.

The long day’s journey into night is the story of James’s wife Mary brilliantly portrayed by Seana McKenna. Mary is a pathetic woman who was raised in a convent and fell in love with the image of Tyrone as an actor and had to live the reality of cheap hotels, addiction to morphine, the death of a son and the double life of hiding from reality until she goes into the inevitable night. McKenna gives a deeply-felt portrayal of the unfortunate Mary who goes from the pretense of health to the reality of madness. She shows us Mary’s torn interior as we see the wrecked exterior behind which the truth is supposed to be hidden. 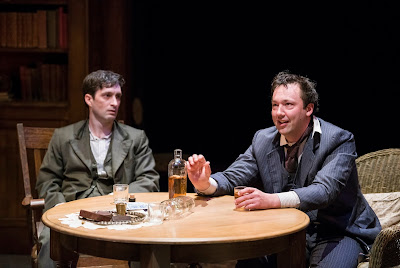 Charlie Gallant (left) as Edmund and Gordon S. Miller as James.
Photography by Emily Cooper.
James Tyrone Jr. (Gordon S. Miller) is a wastrel who spends his time drinking and whoring and has no other ambition in life.

Edmund (Charlie Gallant) is the youngest son and he is suffering from tuberculosis as did O’Neill. It is a self-portrait of the playwright as a sickly man, a would-be poet and a dreamer. Gallant with his sallow complexion, deep-set eyes and sickly appearance has to cope with the fear of tuberculosis and his father’s penny pinching. Mendacity, as Big Daddy put it in Cat on a Hot Tin Roof, is a deeply rooted habit in the Tyrone family.

The cast has to express the hatreds, love and harrowing ghosts and emotions that tear the Tyrones apart and keep them together.

The maid Cathleen with her thick Irish brogue is very funny and provides a perfect contrast to the warring Tyrones and Amy Keating is a delight to watch in the role.

The play takes place in a summer home in Connecticut during a single day. The Tyrones wear light summer clothes and should be enjoying the holiday. The set by Peter Hartwell and costumes by Gillian Gallow are a pleasant image of a well-off family enjoying the summer. Again the image and the reality do not match.

O’Neill’s verbosity is inescapable but in Long Day’s Journey is becomes a tool for driving home the emotional morass and the toxic atmosphere in which the Tyrones live. Despite some complaints, in the end it all adds up to a great night at the theatre.  .
______