THE MUSIC MAN – REVIEW OF TRIUMPHAL PRODUCTION AT STRATFORD FESTIVAL

What follows is a rave review of The Music Man, the triumphal “opening” production of this year’s Stratford Festival.

But first the news. The season was scheduled to open on May 28, 2018 with a production of The Tempest directed by Artistic Director Antoni Cimolino and starring Martha Henry as Prospero.

In well-established tradition, on a hot and sunny evening, the Scottish pipers in full regalia were on hand to welcome the Pooh-Bahs. They limos arrived and the dignitaries walked on the red carpet in all their grace and finery. They and hoi polloi started taking their seats in the Festival Theatre when the public address system was heard advising us to vacate the theatre. We did and we were instructed ever so politely to go beyond the garden and then told to leave because opening night had been cancelled. 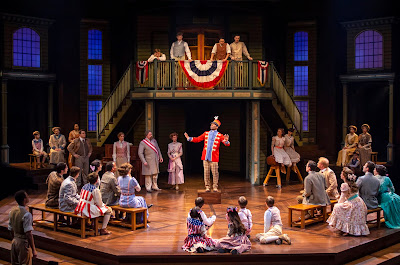 Daren A. Herbert (centre) as Harold Hill with members of the company in The Music Man.
Photography by Cylla von Tiedemann.
Someone had informed the police that there was a bomb in the theatre. It was a hoax but it took pretty much the whole night to make sure that nothing had been planted in the theatre.

Thus The Music Man took place of honour as the opening production the next night. The event of the previous night had a galvanizing effect on the audience who attended with the determination that no terrorist or would be-terrorist would affect the venerable Festival. There was police presence and care taken for our safety but no one seemed to mind. In fact there was feeling of a united front in the face of a possible risk.

This became apparent during the singing of our national anthem when everyone sang with added vigour and conviction.

The audience’s enthusiasm and conviction remained unabated during the performance, a performance of such extraordinary energy, enthusiasm and just plain joy that it left everyone agog. I cannot recall ever having seen a spontaneous standing ovation in the middle of a show at the end of a dance routine. It happened in this production and I need hardly add that the cast at the end of the show was greeted with wild enthusiasm.

Meredith Willson’s great 1957 musical is a love story (flamboyant conman Harold Hill and reserved librarian Marian Paroo) in small-town Iowa in 1912.  He pretends to be a professor of music who will organize a band and she knows that he is a liar. They fall in love anyway and the town miraculously gets a marvelous marching band with beautiful costumes.

In the meantime there are some melodic songs, rousing music (Seventy-six Trombones) and dance routines that contain rhythm, discipline, acrobatics and enough energy to fuel a jet engine. The routines and almost everything that happened on stage energized the audience and created such a symbiotic connection between stage and auditorium that is the essence of theatre but rarely achieved with such success.

Most of the credit must go to Donna Feore who directed and choreographed the production. Every step, every somersault and every move is done with studied precision and elegance. 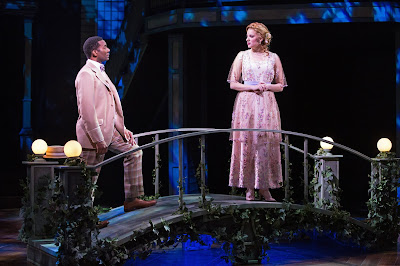 The citizens of the town are good for comic relief starting with Mayor Shinn (Steve Ross), his wife Eulalie (Blythe Wilson), Marian’s mother Mrs. Paroo (Denise Oucherek) and the town ladies,. The town teens are led by Tommy played by the stupendous dancer Devon Michael Brown who can do Olympic level somersaults and dance with extraordinary athleticism. He craves Zaneeta (Heather Kosik) daughter of the seriously disapproving mayor.

The “news” of the bomb threat will no doubt go down in the history of the Stratford Festival. What followed the next day with the production of The Music Man should be remembered by those who were there as an antidote to the threat and the resulting great night at the theater.
______

The Music Man by Meredith Willson (book. Music, and lyrics) opened on May 29 and will run in repertory until October 26, 2018 at the Festival Theatre, Stratford, Ontario. www.stratfordfestival.ca