Bryony Lavery’s Frozen, now playing at Artscape Wychwood Barns, consists of about thirty brief scenes performed by three actors. There is a dramatic plotline that emerges slowly and builds up to a climactic scene. Most of the scenes are monologues with the actors addressing the audience directly and a handful of scenes involve two characters but never all three together.

Director Will Kings tells us in a program note that he was drawn to the as a piece for actors and he is right. We see Nancy McAlear, Madryn McCabe and Scott McCulloch being put through a series of tough and talent-testing scenes that may serve as great acting school exercises where the student is asked to act out difficult emotional states. 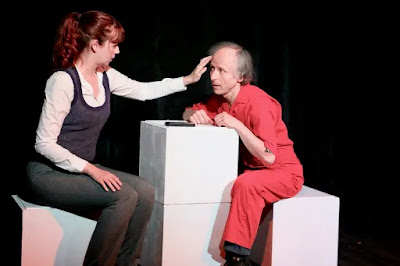 Madryn McCabe and Scott McCulloch in Frozen
Madryn McCabe plays Agnetha, a psychiatrist who is doing research on serial killers and the idea of forgiveness. She has issues of her own including fear of flying and problems with her fellow researcher. We see McCabe/Agnetha as a lecturer before fellow professionals, as a psychiatrist trying to understand the mind of the psychopath Ralph (McCulloch), dealing with Nancy (McAlear), the mother of one of his victims and her own problems. With some exceptions, she is facing the audience and alone and goes through a series of emotional turmoils that she must rise to in a matter of seconds. There is very little time for emotional build-up and she must rise to the demands of the scene in a leap.

This applies to all three actors. Nancy’s daughter has disappeared at age ten. She holds on to a dream that one day her girl will knock on the door and say she is back.

She slowly learns that it is not likely to happen and finally must accept the fact that her daughter was brutally sexually molested and murdered by a serial killer. The range and depth of emotions that McAlear must express, including the idea of forgiveness and meeting with the murderer, is staggering and she rises to them.

Ralph has a very expensive collection of pornographic material with an emphasis on little girls. He regrets that killing young girls is illegal. He is a liar and goes through a series of emotional outbursts screeching his anger, breaking down occasionally and in the end showing perhaps a shred of humanity or maybe not even that. I will not spoil the ending for you. 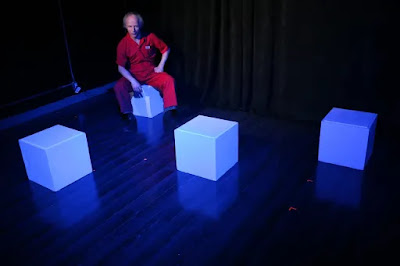 The play takes place in England but Agnetha is American and therefore speaks with an American accent. Ralph speaks in an English accent, and it is thick cockney. Nancy, my guess is, speaks with a Yorkshire accent.

The play is done in a small room in Artscape Wychwood Barns before an audience of about a dozen people. The only props were four white boxes which were stacked in different configurations by the actors.

Lavery, who is now 70, has written some 25 plays and Frozen is probably her best and certainly her best known work.
_____

Frozen  by Bryony Lavery produced by Seven Siblings Theatre opened on May 25 and will run until June 3, 2018 at Artscape Wychwood Barns, 601 Christie St. Toronto, Ontario. www.sevensiblingstheatre.ca/