LUISA MILLER – REVIEW OF LIVE FROM THE MET PRODUCTION

Carlo loves Luisa. There can be no doubt about that: they are head over heels or in whatever acrobatic position you fancy, besotted with each other. Her father has some reservations which grow into terror when he is informed that Carlo is a fraud and a seducer and is in fact Rodolfo the son of Count Walter. The Count is violently opposed to his son having anything to do with a commoner like Luisa, the daughter of a miller, especially since he has promised Rodolfo’s hand in marriage to the wealthy Duchess Federica. 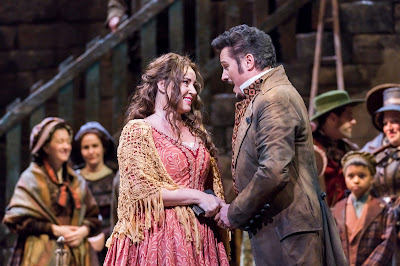 
Now Federica has a lot of virtues like royal provenance and wealth, and she and Rodolfo grew up together. On the downside she does have reduced resistance to the law of gravity, she is a mezzo (and we know the soprano gets the guy) and Rodolfo would rather eat dirt than marry her.

Tyrol, we have a problem.

Call Verdi. Call Salvatore Cammarano for a libretto. This calls for an opera to resolve all these problems. And the result is Verdi’s 15th opera, Luisa Miller, which was first seen in 1849. It is no longer completely ignored but it is infrequently performed and underrated. It is a marvelous opera and deserves more frequent productions.

The Met has revived Elijah Moshinsky’s production, first seen in 2001, with a first-rate cast and the result is an astonishingly impressive and enjoyable afternoon at the opera. Luisa Miller makes punishing demands on the lead soprano and tenor. In soprano Sonya Yoncheva as Luisa and tenor Piotr Beczala as Rodolfo, the Met has vocal power and beauty to spare.

Yoncheva exudes youth and innocence as she expresses passion, disappointment, grief, fear and courage as she goes through the phases of Luisa’s life. She sings with tonal beauty and gives us a superb Luisa. Matching her is Beczala who is also passionate, heroic and human. His vocal prowess and range are never in doubt and always on display.

Placido Domingo sings the role of Miller, Luisa’s compassionate father, a baritone role. He has sung Rodolfo many times and there is a DVD of him in that role that was recorded in 1979. The Deity that is protecting him and especially his vocal chords has clearly done an outstanding job. There can be no rational explanation for someone singing as well as Domingo does at age 77.

Mezzo soprano Olesya Petrova has a rich, luscious voice and sings the role of the rejected Federica. She has been in love, we are told with Rodolfo all her life, and she loses her last chance to the peasant girl Luisa. No wonder she is angry and unforgiving. An excellent performance.

Bass Alexander Vinogradov is Walter, the father of Rodolfo and together with Wurm (Dmitry Belosselskiy), the heavy of the opera. When his son threatens to marry Luisa, Walter orders that Luisa and her father be arrested. But Rodolfo has a secret weapon that he pulls out and stops Walter in his tracks. 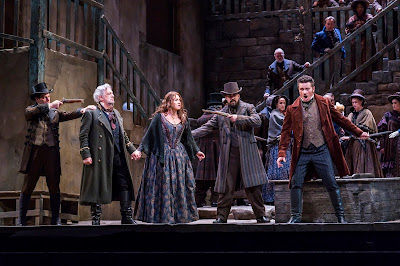 Plácido Domingo as Miller, Sonya Yoncheva as Luisa, and Piotr Beczała as
Rodolfo. Photo: Chris Lee / Met Opera
In Wurm, Walter has a fixer who takes care of things for him. I thought of him as a progenitor of Michael Cohen. Perhaps I am being unfair. Wurm was promised the beautiful Luisa and all Cohen got was money. We get a fine performance in the role by Belosselskiy.

Moshinsky’s and Set Designer Santo Loquasto’s production is opera on a grand scale. From the opening scene of a 19th century village in Tyrol (they tell us it is in England but no great matter) to the grandeur and opulence of Walter’s castle, we see production values to leave us impressed. We see the change of sets in the live broadcast and they require organization, manpower, budget and engineering that no more than a handful of opera houses can even imagine.

The Metropolitan Opera Orchestra and Chorus were conducted by Bertrand de Billy in a production that may claim to be one of the best you are likely to see this season.

And, oh yes, there is good news. Rodolfo and Luisa enjoy a last drink and they live happily ever after. But, where?

You will just have to see the opera to find out.
__________
Luisa Miller by Giuseppe Verdi with libretto by Salvatore Cammarano was shown Live in HD at select Cineplex theatres across Canada and can be seen again on May 21, 23, 27 and June 16, 2018. For more information go to: www.cineplex.com/events